Posted on November 28, 2019 by Simon Richardson 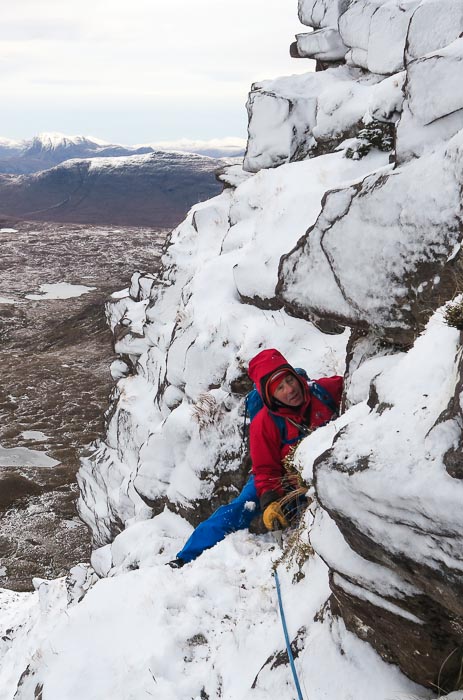 The night of November 18/19 was the coldest in the recent cool snap and Neil Wilson, Roger Webb and I were lucky enough to be in Torridon. Next morning the turf was brick hard at sea level so we set our sights on a tempting unclimbed objective on Benn Alligin – the 200m-high triangular face framed by Backfire Ridge and the dramatic cleft of Diamond Fire.

When we arrived below the face it became immediately clear why it was unclimbed. Two blank-looking vertical sandstone bands cut across the cliff with no visible way through and the face was topped by an imposing headwall. We hummed and hawed, looked left and right, and eventually decided that with a bit of faith there may just be a line that wiggled its way through.

As is so often the case with Scottish winter climbing, optimism can take you a long way, and five pitches later we had successfully negotiated the bands and were approaching the headwall. Fortunately the rock was blockier here, and I led a pitch up a hidden slanting groove and then traversed right along a narrow ledge to the centre of the wall where a narrow line of turf led up to its apex. I’d left Roger no option but to climb the turf, but he dispatched it with style to arrive at a large block crowning the top of the face. A traverse across the Horns in the setting sun provided a fitting end to the day.

There was an unashamedly proprietorial reason behind the route name. Throughout the climb we had admired the views east across Torridon and north up the coastline towards An Teallach. Neil and Roger are proud members of the Dundonnell Rescue team that has its base at the foot of An Teallach, so we settled on Dundonnell Face. The route had one or two moves of approaching Tech 6 but in fuller conditions these will become easier, so an overall grade of IV,4 seemed appropriate for a very traditional Scottish winter outing.