All Go High Up in the West

Posted on November 27, 2019 by Simon Richardson 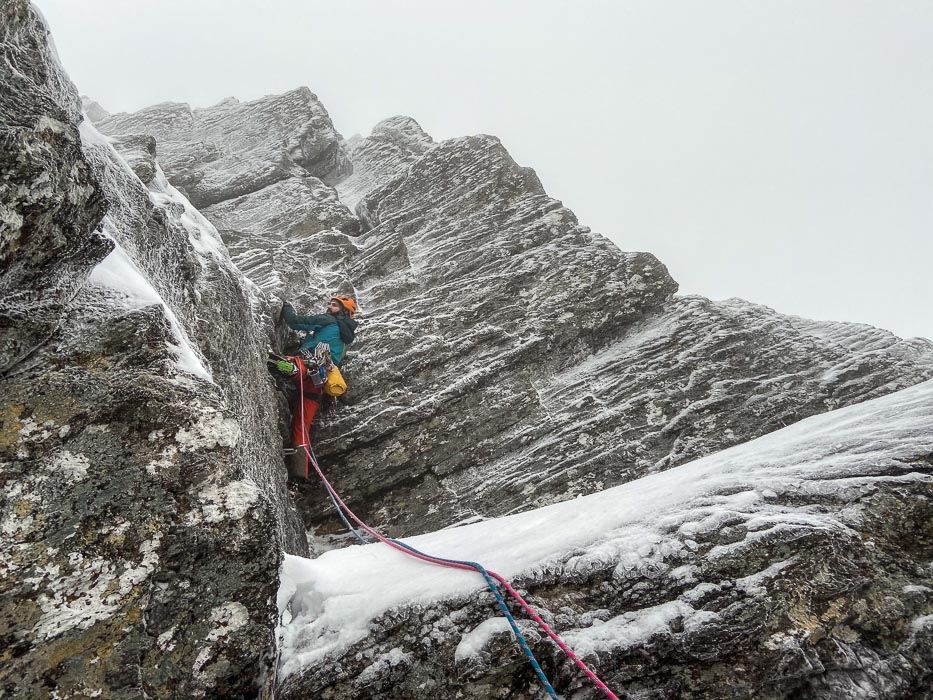 Garry Campbell climbing the initial steep corner of the third pitch of Aonach Wall (V,6) during an early repeat. This six-pitch line is situated on Raw Egg Buttress which lies high on the west face of Aonach Beag. (Photo Nathan Adam)

Temperatures warmed up during the second half of last week, but on the high crags in the West winter hung on, and some excellent routes were climbed. On Stob Coire an Laoigh, the modern classic Taliballan (V,6) had several ascents together with Centrepoint (VI,7) and early repeats of Cobra Corner (VI,6) and The Wee Grey Man (IV,5). High up on the Ben, Gargoyle Wall (VI,6) has been popular and Iain Ballantyne and Callum Johnson had a good couple of days with Darth Vader (VII,7) and Stringfellow (VI,6)

I was intrigued to receive an email from Nathan Adam, who climbed Aonach Wall (V,6) on Anoach Beag’s Raw Egg Buttress on November 22 with Garry Campbell and Ali Rose. Raw Egg Buttress is another high altitude location that freezes fast, but is not visited often.

Nathan wondered whether Aonach Wall had been repeated. I thought it may have seen a second ascent, but I could find no record when I searched my files. I think Roger Everett and I originally graded it V,7 when we first climbed it in 1988. The two-tier grading system was just being introduced at the time, and perhaps we made it sound overly fierce and put off subsequent ascents (although it soon settled down at V,6 in the 1994 Ben Nevis guidebook).

“We found a peg on the third pitch, and Ali and Garry noticed some tat on the guidebook fifth pitch, so I assume it has been repeated, but reckon it deserves more attention, “ Nathan told me. “We thought the route was worth two stars as the climbing on the last two pitches are great quality, and even those below that are still good sport with steep climbing between easier ground. I’ve found the routes on the West Face of Aonach Beag to be some of the most enjoyable mixed climbing I’ve done. “