Posted on November 25, 2019 by Simon Richardson 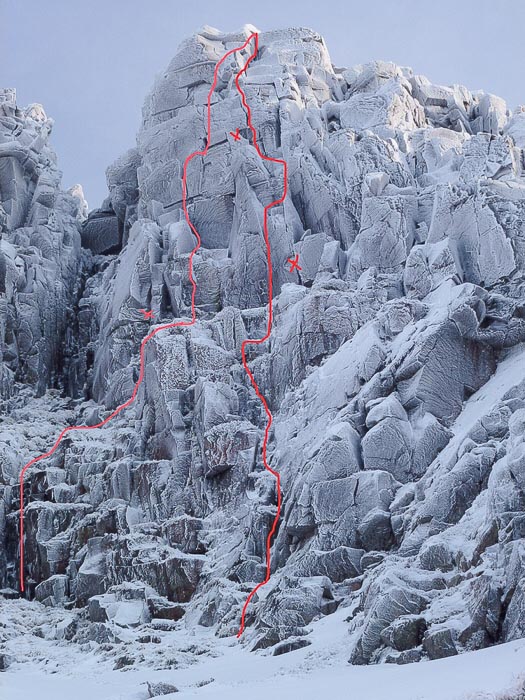 The lines of Berserker (VI,8) – left, and Shapeshifter (VIII,8) – right, on Lurcher’s Crag on Cairn Gorm. These two excellent mixed routes lie on the buttress to the left of Deerhound Ridge. (Photo Jamie Skelton)

Jamie Skelton and Dave Almond had an excellent two days climbing in Northern Cairngorms last week that resulted in an early repeat of The Snowpimp (VIII,9) in Coire and Lochain and a new route on Lurcher’s Crag. Berserker (VI,8) takes a parallel line to the left of Shapeshifter (VIII,8), last winter’s fine addition to the crag by Steve Perry, Andy Nisbet and Helen Rennard last winter. Jamie takes up the story:

“Back in January I contacted Steve Perry about doing the second ascent of his route Shapeshifter when he told me of a possible line to the left of that route. I had this in mind when I arranged to climb with Dave Almond for a couple days this week. On November 20 we post holed our way in towards Lurcher’s against a Southeasterly blowing into our faces suspecting the cliffs were going to be stripped bare. Visibility was down to 30m so we decided to head into Lochain and leave Lurcher’s for another day. Eventually we were surprised with the sight of a very heavily hoar frost-covered cliff. The Snowpimp was chosen and after a lot of clearing and a bit of huffing and puffing was duly dispatched.

The following day [November 21] we returned to Lurcher’s with better visibility but worse conditions underfoot. After toiling to the base of the route we geared up and Dave took the first pitch up an awkward V-groove. I lead off up the next pitch involving a short slightly overhanging wall followed by corners and cracks. Half way up I decided the rucksack was making it a bit more of a challenge than I had suspected so we changed to big wall tactics establishing a hanging belay between the very spacious ledge systems and threw in a bit of bag hauling for good measure. Dave accepted the challenge of the crack system to the left of the final arête and enjoyed a bit of a fight before joining the final few moves of Shapeshifter. The route offers hard moves with good rests in-between and has good protection throughout.”