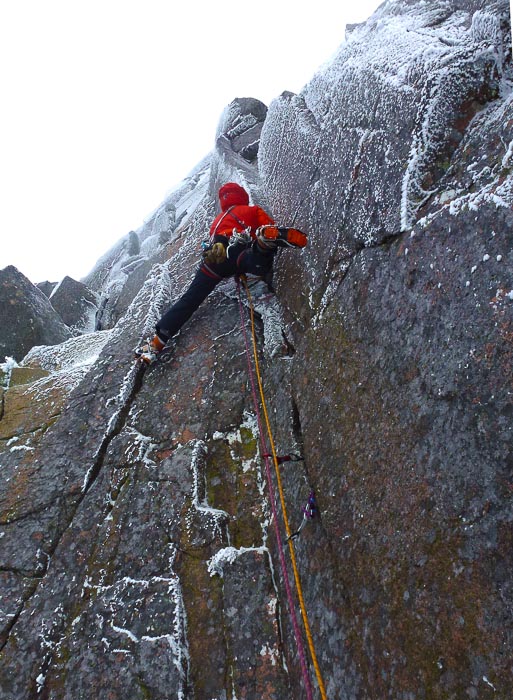 Steve Perry climbing the overhanging crack on the crux second pitch of Shapeshifter (VIII,8) during the first ascent. This technical mixed climb is the hardest winter route climbed on Lurcher’s Crag to date. (Photo Andy Nisbet)

On January 20 Steve Perry, Helen Rennard and Andy Nisbet put up the first Grade VIII on Lurcher’s Crag with their ascent of Shapeshifter. This route was a long-term project for Steve who had attempted this prominent line last season.

“I failed on the line last winter after trying to lead both pitches myself too soon after breaking my leg and ankle,” Steve explained. “Since then I’d been pretty desperate to get back, as I wasn’t the only person who knew about the line.

Andy knew about my attempt and suggested breaking the top pitch into a more realistic two pitches. We asked Helen to come along as she is attempting 40 Grade VII or above routes this winter to celebrate her fortieth birthday and we were keen to help out. This was Helen’s fourth day out on the bounce after climbing Himalayan Shuffle (VII,8) and Kindergarten Corner (VII,8) at Mullach nan Coirean, then Piranha (VII,8) on Aonach Mor, phew!

Andy wasn’t feeling too great in the morning as he was recovering from flu, but we talked him into walking to the crag and seeing how he felt. The weather was pretty dire whilst gearing up, so a little more encouragement for Andy was needed but once down South Gully things started to improve and so did he.

The route is on an overhanging buttress nestled in the amphitheatre between Drystane Ridge and Deerhound Ridge. The buttress is gained via a bold, turfy rake which Helen quickly opted to lead as Andy still wasn’t a hundred per cent. The pitch is much trickier than first appears but Helen made good use of her recent winter mileage and climbed it in no time.

I led the second pitch that begins with a vicious overhanging crack (crux) leading into a groove and then finishing with a thin technical mantle traverse to a large flake belay. I continued to lead on pitch three where the crack-line continues up an overhanging wall into some tenuous torque moves leading into a wide crack-cum-chimney which climaxes with an awkward bellyflop mantle onto the top.

The route was excellent and Andy was well happy he’d carted on. We knew he would for a new route. Myself and Andy were slightly unsure of the grade of this new line but Helen confirmed it was harder and better than her last three routes.

We agreed on the name Shapeshifter (VIII,8) and three stars after a fantastic hike back to the car under the rare Blood Red Wolf Moon!”