Posted on November 21, 2019 by Simon Richardson 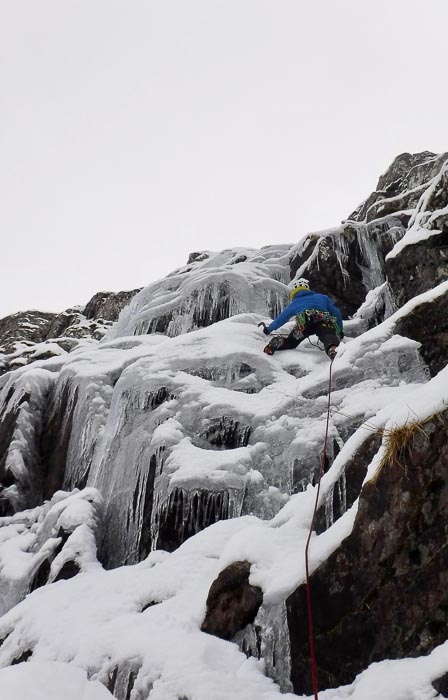 Oonagh Thin on the first ascent Early Bird (III) on The Saddle in Gen Shiel. The very wet autumn has led to unusual amounts of ice for so early in the season across many parts of the Highlands. (Photo James Milton)

James Milton and Oonagh Thin made an exploratory visit to The Saddle in Kintail on November 16. Their enterprise paid off with the first ascent of Early Bird (III), a two-pitch ice route on the North-West Face. James takes up the story:

“Oonagh and I were in the area for EUMC bothy meet. Having driven up in the dark, a vague outline of snow was enough to convince us to brave a long walk in to attempt to find some in condition climbing. We were fairly certain the Forcan Ridge would be climbable and therefore decided to climb it and try find something on the North-West face of The Saddle. The idea to climb on the face came from looking around the area on FATMAP and OS maps whilst procrastinating. A few vague pictures were enough to justify the approach.

The climb up the Forcan Ridge was brilliant and in great condition. Having summited The Saddle at 11am we descended to under the North-West Face to realise it was significantly less steep or featured than we had thought, although there were a few enticing lines. The most obvious was Big Gully (we were unsure whether this has been climbed in winter), but on reaching the base it seemed its high sides had sheltered it from the snow leaving it very bare. [Big Gully had its first winter ascent courtesy of Andy Nisbet and party in February 1994]. Looking around for another line, we came across a large area of ice, most of it discontinuous, but one clear line looked complete and climbable.

I set off on the first pitch following a series of ice steps, each slightly harder than the last, until I reached a much lower angle section. I followed this up to a large ledge below a steeper and more sustained section of ice, and found a much appreciated rock belay. Oonagh set off up the pitch, easily climbing the sustained ice to top out after 15m. It was a fun little route that was definitely worth the approach in conjunction with the Forcan Ridge.”

Simon Richardson is a passionate Scottish winter climber
View all posts by Simon Richardson →
This entry was posted in New Routes and tagged James Milton, Oonagh Thin, The Saddle. Bookmark the permalink.