Posted on November 20, 2019 by Simon Richardson 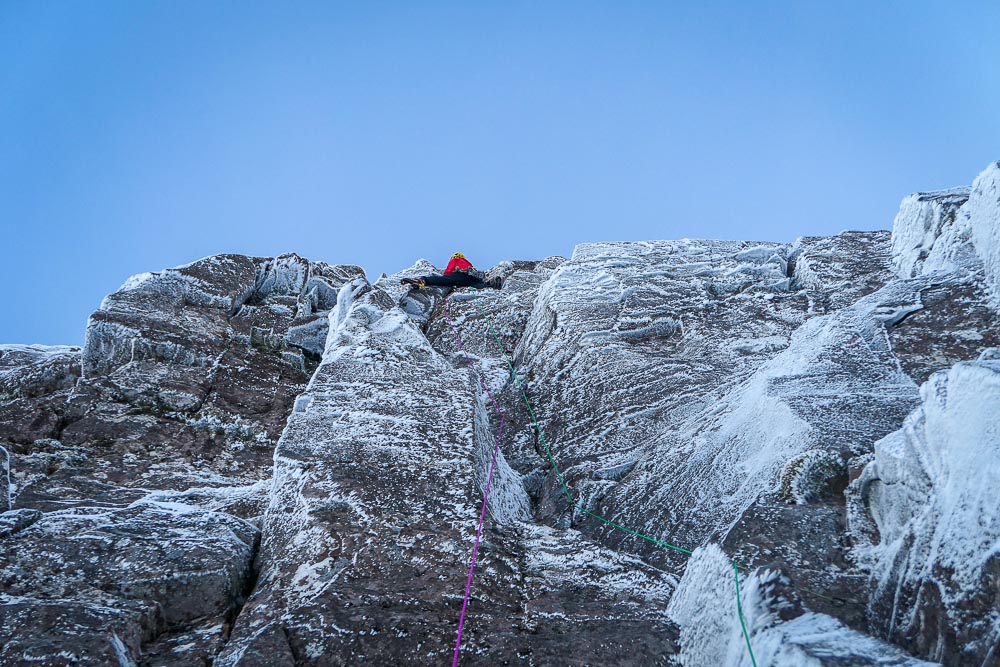 Guy Robertson on the first ascent of Local Hero (VIII,9) on Hayfork Wall on An Teallach. The route was named in memory of the great North-West pioneer and activist Martin Moran. (Photo Greg Boswell)

November 18 was a cold and settled day across the Highlands and Greg Boswell and Guy Robertson made best use of the opportunity with an excellent new route on the Hayfork Wall on An Teallach. Local Hero (VIII,9) takes the left-hand corner system on the main wall to the left to the Wailing Wall area. This 90m-high wall is situated at an altitude of 900m, collects snow readily and is often in condition, and is the home of The Forge (X,10), Greg and Guys’ superb addition from last season.

The wall was first breached by Haystack (VI,7 Andy Nisbet and Dave McGimpsey January 2000), but it was Martin Moran who fully recognised the mixed climbing opportunities when he climbed several new routes including the outstanding line of The Wailing Wall (IX,9) with Murdoch Jamieson in December 2010. Tragically Martin was lost in an expedition in the Indian Himalaya last summer.

“The three-pitch route itself was pretty special, but the weather made it even better!” Greg told me. “The line was enjoyable throughout and had good gear on both hard pitches, but despite first impressions, it was very pumpy with lots of sustained climbing up the overhanging groove system, culminating with some funky out there moves through the steep bulge on the third pitch. All this made for the perfect way to start the season and get the juices flowing.

We settled on the pumpy grade of VIII 9 and called the route Local Hero In memory of Martin, as he had brought this magnificent area to our attention and he was in both of our thoughts throughout the day. It felt only right to name the route in his honour.”