Posted on November 18, 2019 by Simon Richardson 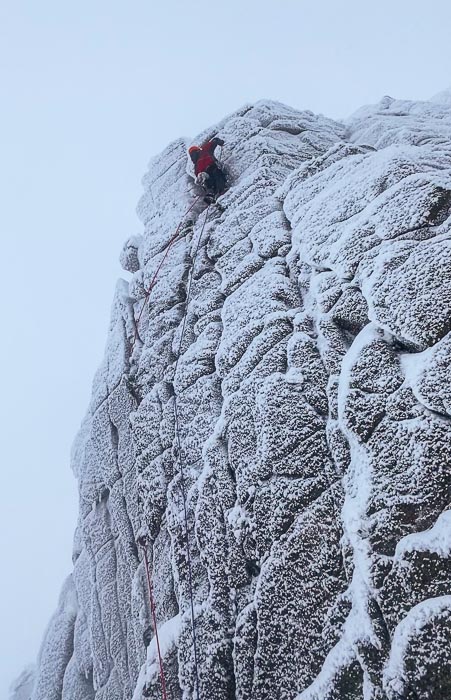 Mark Robson and I took the easy option on Sunday November 17 and arrived late at the Cairn Gorm Ciste car park in the full knowledge that others would be ahead of us and making a trail to Creagan Cha-no. The cold snowy weather has provided a good start to the season, but the Cairngorms now have almost too much snow. Teams failed to make it into the Northern Corries on Thursday due to deep drifts. Cha-no is a good alternative in these conditions as its approach slopes are often more scoured by northerly winds, but even so, Mark and I were grateful for the well-beaten track to the top of Recovery Gully.

Teams were already at work on Anvil Corner and Chimney Rib when we arrived, but we headed south to Blood Buttress where we climbed the series of square-cut corners between Half Blood and The Blood is Strong. I’d been wanting to climb this line for some time so it was satisfying to find it was worth the wait and provided a worthwhile IV,5.

We then visited Grooved Pinnacle Wall area and climbed the cracked arête between Fox Gully and Ghost. Mark couldn’t resist trundling a huge flake when he was seconding so it had to be called Vandal’s Arête (IV,5). Mark then redeemed himself by leading the superbly featured wall of flakes and cracks to the right of Ghoul. The ice-free cracks swallowed up cams as Mark moved swiftly upwards towards a menacing final offwidth. I thought this would be real stopper, but an unlikely hidden hold kept the grade of White Walker to a reasonable V,6.

To finish off we climbed the groove and corner to the left of Broomstick Buttress. I’d failed on this last season, and thought that with more snow banking it would be a straightforward Grade II. This would certainly be true if the snow was consolidated , but much wallowing below the final corner meant this was probably the most strenuous Grade II that I have ever climbed.

By the time we arrived it was dark so we were grateful for the trail back to the car park. Last on the crag and last to finish – it had been a good day.