All Go on The Stooee

Posted on November 13, 2019 by Simon Richardson 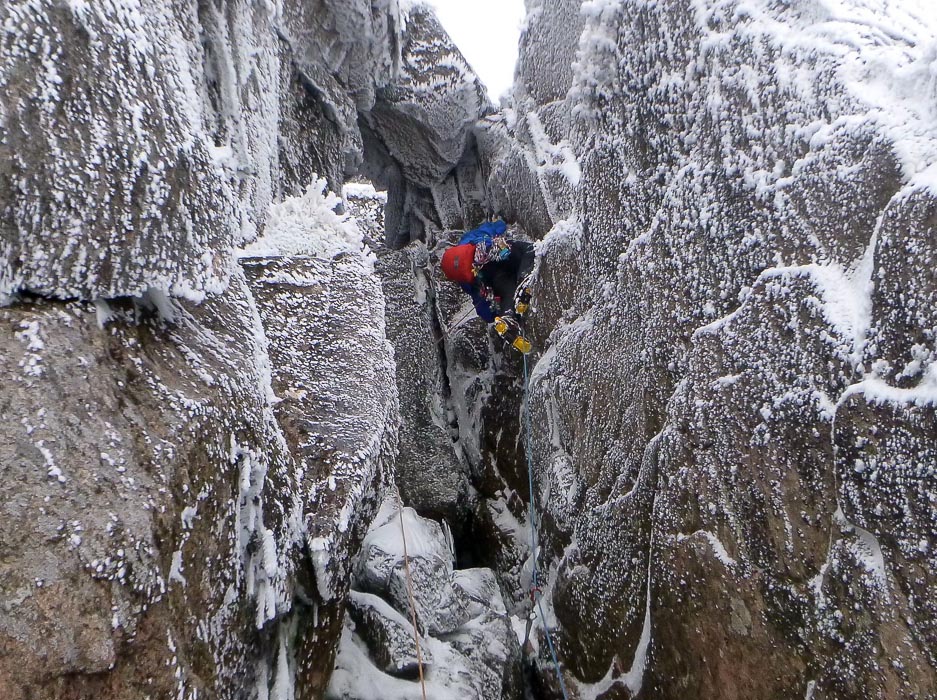 Dave Kerr approaching the through route on the second known ascent of The Stooee Chimney (IV,7) on Lochnagar. The original climb climbed the outside of the chokestone at IV,7, but taking the more logical through route was thought to be worth a more amenable IV,6. (Photo Erick Baillot)

I was intrigued to find out that Erick Bailot and Dave Kerr climbed The Stooee Chimney on The Stuic on Lochnagar on Sunday November 10. The Stooee Chimney is the obvious central line and was the first route ever attempted on the North-West Face way back in November 1995. Stymied by a huge chokestone, I returned two months later and climbed it with Gordon Scott. I can’t remember if the through route was blocked or not that day, but we found a strenuous way around the outside of the chokestone and graded the route IV,7. I suspect this rating has put off subsequent ascents and I’m pretty sure that Erick and Dave’s ascent is the first repeat.

“We had a grand old day in Coire an Eun,” Erick told me. “Neither of us had ever been before. Being back to the car by 16:00 felt luxurious and I managed to make it back home to eat dinner with my kids after two routes! We started with Morning Has Broken (V,6) and then did The Stooee Chimney which we both found really fun. We went into the through route probably at an easier grade (IV,6?) then on the outside and right as per description. It was too inviting to ignore.

So this season’s count officially opened with two routes we’re happy to give two stars each. We weren’t the only team there – Stuart MacFarlane and Robin Clothier on Saturday [they climbed First Light (IV,5) and Stegosaurus Rib (II)] and an Aberdonian team doing two easier lines further east.”