Boswell and Robertson Continue To Forge Ahead

Posted on December 13, 2018 by Simon Richardson 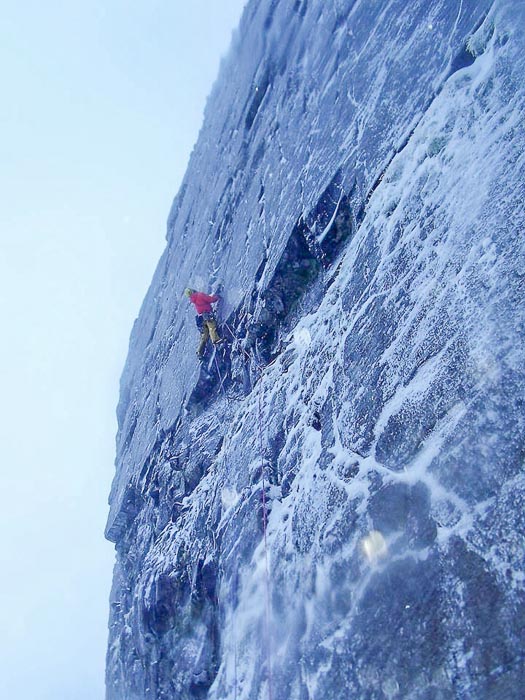 Greg Boswell setting off up the 45m-long crux pitch of The Forge (X,10) on An Teallach during the first ascent. This sensational line climbs one of the most impressive mixed walls in Scotland. (Photo Guy Robertson)

Greg Boswell and Guy Robertson kicked the winter season into higher gear with their ascent of The Forge on An Teallach on December 4. This astounding route, which takes a tenuous discontinuous crack-line up the middle of the awe-inspiring vertical wall above Hayfork Gully, was one of the most sought after winter objectives in the country.

In recent years, the Boswell-Robertson team has dominated the Scottish winter scene with a series of outstanding and futuristic routes. Routes such as The Greatest Show on Earth (X,10) on Cul Mor, Range War (X,10) on Creag an Dubh Loch and The Holy Grail (IX,10) on Buachaille Etive Mor (to name just a few) take improbable lines up the some of the most impressive mountain features in Scotland. The Forge, which weighs in at a weighty X,10, is no exception.

The north-facing aspect and high elevation of the Hayfork Wall, means that it is a natural mixed climbing venue, but even so, it was an inspired choice for so early in the season. “Yeah it was an unbelievable route, especially as I’ve never been in the area before,” Greg told me. “When we eventually made it to the top of the gully and saw the beautiful silver hanging wall above, I knew we had to try it! Despite it being the first route of the season and the wall looking so imposing, I was pretty relaxed about trying the line.”

The route was climbed in two pitches with Greg leading the long first pitch that proved to be the crux. Greg described the climbing as ‘very technical, super physical with multiple boulder problem style cruxy sections along the way’. Often there were only ‘minuscule hooks and no foot placements’. The pitch was likened in style to the The Hurting (XI,11) in Coire an t- Sneachda. Guy led the second pitch through a huge roof and technical wall above before reaching easy ground after 40m.

“The route was full on from the word go,” Greg explained. “The climbing was so intricate and enjoyable, that I just kept plodding on and working it out. Looking up after already climbing two-thirds of the crux first pitch, I did wonder if it was ever going to end! I still had a long way to go and it was getting harder as I gained height. But standing on the belay ledge after the four-hour lead, I remembered why I live for this game. That feeling is euphoric! What an awesome line and start to the season – with such a strong route behind us, Guy and I are aching for more!”

1 Response to Boswell and Robertson Continue To Forge Ahead