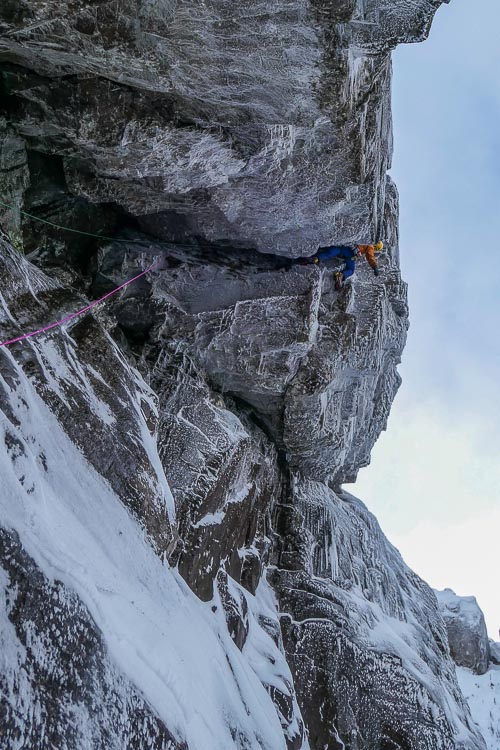 Guy Robertson wrestling with the Great Cave during the first ascent of The Holy Grail (IX,10) on Buachaille Etive Mor in Glen Coe. The route description comes with a serious health warning – “The crux moves may cause nausea and dizziness” – and it is easy to see why! (Photo Greg Boswell)

If you turn to page 97 of the SMC’s Glen Coe guidebook there is a superb picture by Alan Leary of the top pitch of Shibboleth on Buachaille Etive Mor. Look more closely and to the right of the climber you can see an attractive vertical crack rising from the lip of a giant overhang with a huge dark recess below. This is the Great Cave and it was the futuristic objective of Guy Robertson and Greg Boswell when they approached the Buachaille early in the morning on January 11.

The pair climbed the first two pitches of Raven’s Gully before branching out left for two pitches up cracks and grooves (including a short section shared with Guerdon Grooves) to below the Great Cave itself. Its ten-metre roof is split by a huge offwidth crack, which provided Robertson with one of the leads of his life. Unfortunately a chockstone ripped resulting in a fall on the first attempt, but he rejoined the fray and climbed the pitch second go, and moved up to belay in a small alcove on the upper wall 20m above. Greg than finished the route by headlamp and continued up the steep sixth pitch to the top.

The Holy Grail (IX,10) is appropriately named. In summer, an ascent of Buachaille Etive Mor’s Slime Wall is a highlight in most climbers careers, and to climb it in winter is the preserve of the very few. Pioneering a new winter-only line up the wall however, represents a pinnacle of Scottish winter climbing. The style of ascent, technical difficulty, and position on this historic cliff makes The Holy Grail one of the most inspiring Scottish winter routes of recent times.

“The route was really fun,” Greg told me. “It was cool to start up the amazing looking Raven’s Gully and then move left onto the big wall. The route was fairly straightforward in the lower pitches, but still rather pumpy and involved. Once we reached the big ledge below the Great Cave, it was obvious the route was going to step up a bit. The roof was very intense and Guy did an amazing job in staying composed and calm whilst battling with the awkward moves to breach the cave. I thought the crux moves were super hard, and very much at the upper end of the tech 10 range! The last pitch was also very steep and technical, and I was a relieved to finally reach the easier ground above the steepness. All in all it was a great day, and it was cool to have good enough conditions to tick another route off our tick list for the season. Thankfully there’s many, many more still to do!”

1 Response to The Holy Grail