Posted on December 18, 2018 by Simon Richardson 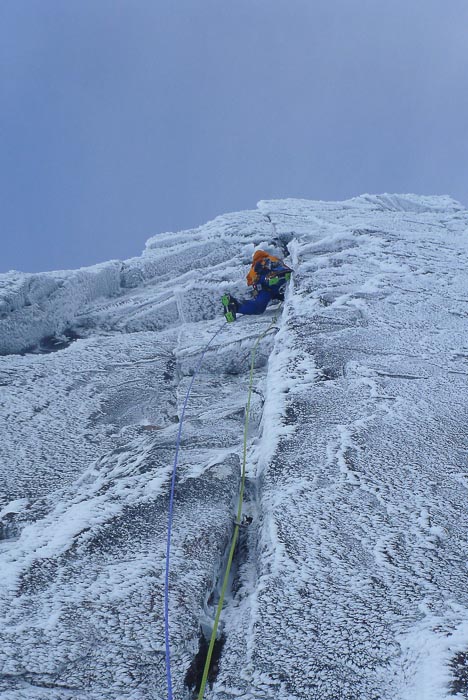 Dave Almond leading Happy Tyroleans (VIII,9) in Coire an Lochain on Cairn Gorm. This fiece test-piece was first climbed by Austrians Florian Schranz, Heinz Zak and Egon Netzer in 2001. Eighteen years on, it remains one of the most difficult Scottish winter first ascents ever climbed by an overseas team. (Photo Helen Rennard)

Dave Almond made a successful start to his season with two big routes, notably a repeat of Happy Tyroleans (VIII,9) in the Northern Corries with Helen Rennard. Dave takes up the story:

“Despite being ready to blast up the 360 miles if winter made an appearance for a three day stretch, I ended up having to roll the dice on both trips I made this year, and winter cheated me by only hanging around for a day or two each time. On my first trip on November 24, with Helen Rennard, we began our season with a successful ascent of Hanging Garden (VII,8) on Ben Nevis that offers some lovely relaxed climbing up the arête above the Gargoyle Wall Cracks.

High on success we tried Demon Direct (IX,9) in the Northern Corries on which I did 40m of climbing and down climbing to get to 10m, then my axe ripped whilst placing gear. Tired and pumped I walked out. Whilst on Demon I had looked across at Happy Tyroleans and decided it was more viable than Demon.

Back again with Helen on the December 10 we found a totally white cliff, blue skies and no wind. Having fought my way up to the base of the crux headwall I was hanging out recovering before the big moves when my left foot slid off the wall and I barn doored off. Fortunately my gear held me and I opted to lower off and pull the ropes. Round two and up, to get a not so slick ascent. The moves are powerful due to it being fairly substantially overhanging but I was assisted with usable ice. The top pitch should not be forgotten and comes highly recommended. Unfortunately the weatherman decided enough was enough and sent me packing for home.

Many thanks to Helen for the perfect catch.”