Posted on December 22, 2018 by Simon Richardson 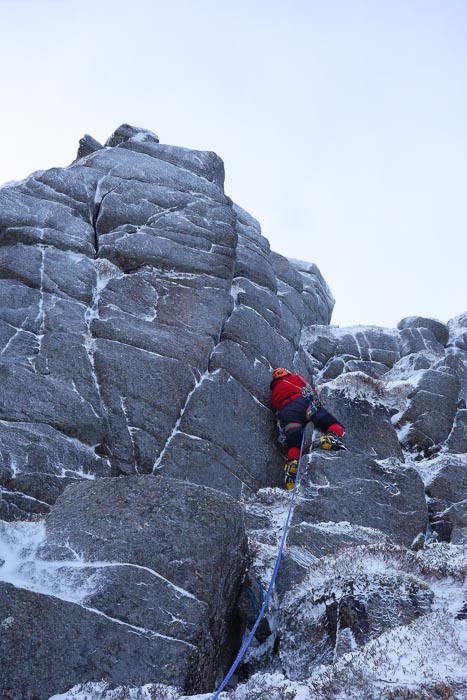 John Higham climbing an unnamed Grade III on Creagan Cha-no. This is one of 20 new routes added to this popular small cliff on the east side of Cairn Gorm this season. (Photo Simon Richardson)

The first half of December was wild and windy, which rather limited activity. The Northern Corries were popular, and on Creagan Cha-no, the new mini guidebook prompted a flurry of activity filling in the remaining lines, which are mostly in the lower grades.

One of the most interesting ascents of the month took place on Ben Nevis on December 9 when Michael Barnard and Katy Bowen added a new finish to Blockhead (V,6) on Creag Coire na Ciste. The route was first climbed by Chris Cartwright and I in 1998 and is described in the SMC guidebook as ‘a good introduction to modern Nevis mixed climbing’. The contemporary mixed climbs of the day such as Cornucopia and Darth Vader were quite testing, so I remember it felt rather refreshing to find an easier mixed route amongst the harder climbing. In the lean conditions that have characterised this season so far, Michael mistook the final corner for a Godefroy Perroux route called Trop Belle Pour Toi (which lies further left), and ended up climbing a steeper right-hand corner to finish.

“The pitch went at the bold end of VI,7,” Michael told me, “and certainly would not be a good introduction to mixed climbing! I must have sounded like a broken record at times, with comments alternating between ‘No way is this a Grade V’ and ‘Just give me a placement!’ At one point while eyeing the gear below and worrying about the next move I ended up clipping into one of my axes; this allowed me to place a peg. Katie was generous enough to remove this on second, allowing someone else to improve on the style.”

On December 11, Martin Holland and Euan Whittaker made an enterprising visit to Coire Brochain on Braeriach. “We knew we’d need to head high for crags to be properly white with freezing levels going above the summits during the day,” Martin told me. “We decided to aim for Domed Ridge as we figured we’d be able to find it in the misty conditions. In the mist we started right down at the toe of the buttress and poorly consolidated snow conditions on the lower slabs forced us leftwards for two pitches until the ground steepened and we moved leftwards in to the gully line, which bounds the lower part of the ridge. The gully surprisingly doesn’t seem to be recorded as a route or a variation. We then followed this gully until it rejoined the normal route at the flattening in the ridge. Given time and conditions we then decided to abseil in to Campion Gully and descend.”

Martin and Euan felt their four-pitch outing was worth IV,4, but since they did not finish at the top of the cliff, they are reluctant to record their climb as a new route.