No Jive Turkeys on Ben Nevis

Posted on December 20, 2019 by Simon Richardson 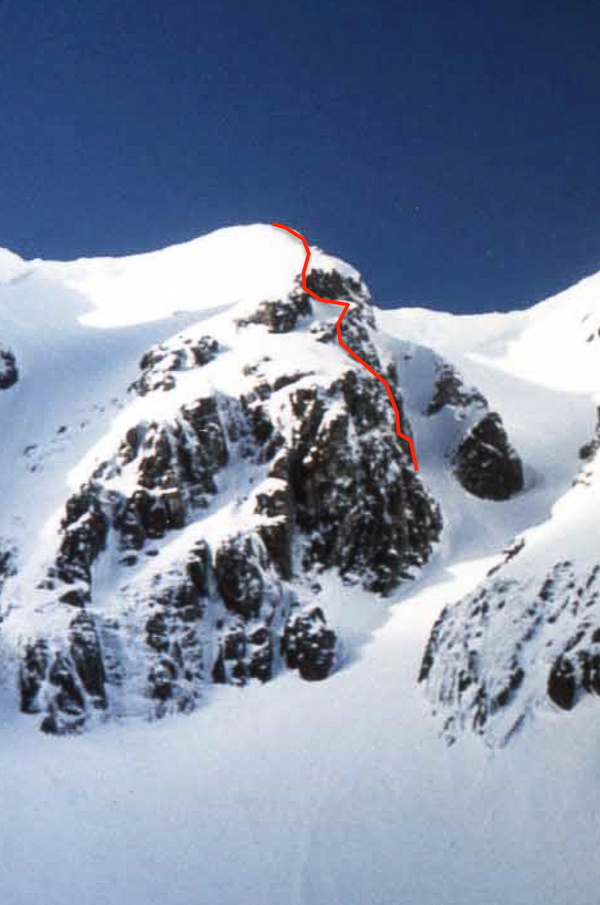 The line of Jive Turkey (V,6) on the right side of Creag Coire na Ciste on Ben Nevis. The upper scoop of North Gully is on the left and Number Four Gully is the broad snow couloir bounding the right side of the buttress. (Topo Jonathan Livesey)

Jonathan Livesey and Connor Henley added a good new route to Creag Coire na Ciste on Ben Nevis on December 14. Jive Turkey (V,6) starts up a small corner groove 10m downhill from the prominent chocked chimney in the climbers left wall of Number Four Gully. It climbs the corner-groove for 5m to a good runner then takes a leftward rising traverse on thin hooks to a horizontal turfy break.  This leads around the arête into a chimney-groove, which finishes in a snow bay. Two easier pitches leads to the top.

“We had no intention of climbing anything new,” Jonny told me. “We were walking into Number Three Gully Buttress but got a bit lost in the dark and driving snow at 6am, and ended up at the bottom of Number Four Gully. We elected to climb a likely looking line assuming it was an established route, and only realised later it might not have been done before. Once we figured it wasn’t in the guide we thought we’d report it – an accidental new route by a couple of jive turkeys!”

Jonny and Connor are certainly not jive turkeys. The front face of the buttress between North and Number Fur Gully has four recorded routes – The Gift (III,4), Forearm (IV,5), Four Play (IV,4), and Fore ‘n Daft (IV,4) – but no routes have ever been recorded before on the steep left wall of Number Four Gully. Harvey Mullen and Robin Clothier climbed the groove and capping roof starting from the right toe of the buttress in December 2002, but I’m not aware of any other ascents in this area.

I’m particularly intrigued because work on a new Ben Nevis guidebook is well underway. Thousands of climbers have passed this wall descending Number Four Gully, so if you know of any more ascents in this area, then please get in touch.