All Go on Shapeshifter Wall

Posted on December 21, 2019 by Simon Richardson 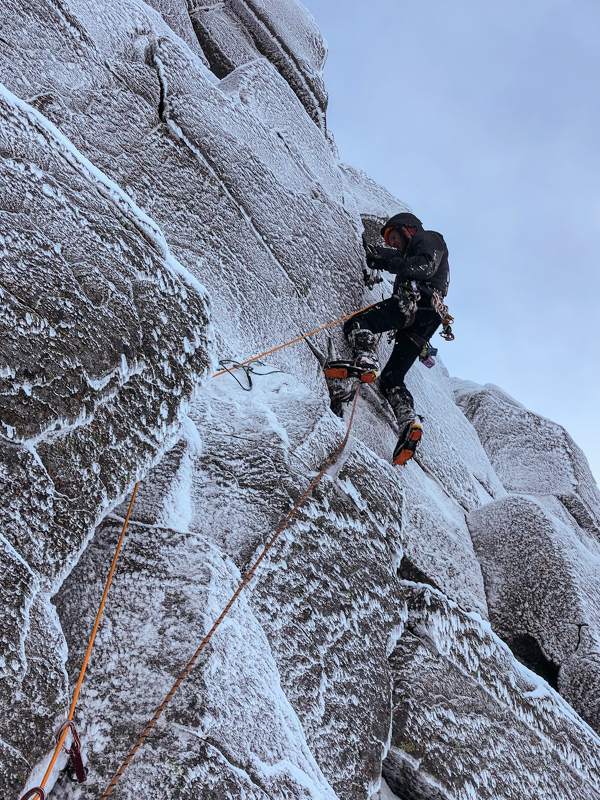 Ross Cowie on the steep crux of Berseker (VI,8) on Lurcher’s Crag during the second ascent. The route was first climbed by Jamie Skelton and Dave Almond in November and lies just left of Shapeshifter (VIII,8) which has had three repeats this season. (Photo Steve Elliot)

It’s been busy on Shapeshifter Wall on Lurcher’s Crag in the Cairngorms. The steep three-pitch Shapeshifter (VIII,8) was the brainchild of Steve Perry who made the first ascent with Andy Nisbet and Helen Rennard last January. The route was repeated nine days later by Jamie Skelton and Matt Glenn, and this season it has had at least three more repeats and is on its way to becoming the most popular Grade VIII in Scotland

Craig Holden and Harry Newmark climbed the Shapeshifter on December 18 and added an alternative finish.

“We climbed the initial turfy pitch and the steep crux as described, then avoided the techy final pitch to escape before the dark and high winds forecast,” Craig told me. “The final pitch avoids the torquing crack and takes a leftward trending line to meet the final crack of Shapeshifter. Interesting climbing around V,6 that served to speed things up and give me a break after the crux!”

The same day, Ross Cowie and Steve Elliot made the second ascent of Berserker (VI,8), which was first climbed by Jamie Skelton and Dave Almond in November, and lies just left of Shapeshifter. “It’s a brilliant route, “ Steve told me. “Steep, positive and well protected.”

Elsewhere in the Northern Cairngorms the Northern Corries have been as popular as ever, although icy cracks have resulted in testing conditions on the harder mixed routes. Finally on December 14, Mark Robson and I had another productive day on Creagan Cha-no with first ascents of the two V,6 crack-lines either side of White Walker, and the two chimneys (IV,4 and IV,5) flanking each side of Continental Chimney.