Posted on December 24, 2019 by Simon Richardson 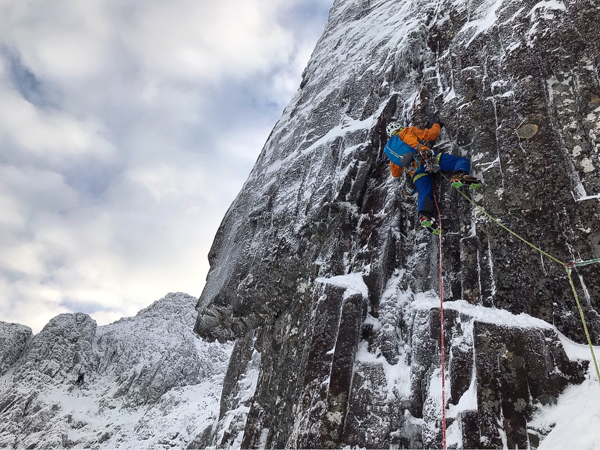 Dave Almond on the bold first pitch of Satyr (IX,9). This sustained IX,9 was first climbed in winter by Donald King and Andy Nelson in December 2010. A recalcitrant mantelshelf move on the top pitch means it may not have had a complete second ascent. (Photo Jamie Skelton)

Dave Almond and Jamie Skelton had an excellent run of routes earlier in December that included the second ascent of Dark Angel (VII,8) in Glen Coe, a near miss on Satyr (IX,9), and a very early repeat of Brass Monkey (VII,8) on Ben Nevis. Dave takes up the story:

“I’d hoped to be climbing in the North-West but conditions were reported as not being very good so I ended up staying around Ben Nevis and Glencoe. Jamie Skelton was foolish enough to accept my proposal to climb and we kicked off with a possible second ascent of Dark Angel (VII,8) on Church Door Buttress on the December 12. It has a spectacular second pitch with well-protected, balancy, technical moves the type of which I really enjoy.

The following day (December 13) we headed in to have a play on Satyr (IX,9) in Stob Coire nan Lochan. Jamie had a go at the first pitch, which I had always thought was the crux, and kept his cool on the highly verglassed first half whilst I was totally uncool belaying him as the ground fall potential is serious for the first eight metres. Fortunately he managed to find a few decent bits of gear above that before he swung onto the head wall before popping off and taking a scary but safe 10m fall.

After lowering him down I pulled the ropes and set off, immediately regretting being so ethical as I entered the verglassed ground fall zone. Despite my worry I made it to the upper headwall, and with Jamie’s fall in my mind, I swung across a series of small hooks to the big ledge to make some very technical knee grovelling moves along the ledge and pulled on to the belay.

Jamie followed without too much effort and quickly raced up pitch two as it became dark. The third pitch goes up a big offwidth crack on the side of a huge pinnacle. I don’t particularly enjoy offwidths and was quite surprised to find some interesting stein pulls and features that meant the second half could be climbed out of the crack.

The top of the pinnacle put me at the base of a three-metre vertical wall leading to a slab with a mantelshelf move onto a small ledge. I pulled up to find the snow had insulated the turf patch and I could only get placements on the front edge of the ledge and despite several valiant efforts, the first of which a tiny crystal pinged off, which first ascensionist  Don King informed me could have been crucial, I couldn’t get established. As time was getting on I detoured left into the last 15m of Central Grooves. After about 3m there was an opportunity to break right onto the slabs and finish up Satyr’s top pitch, but I thought it contrived, as the mantelshelf move is obviously the crux in those conditions.

Even finishing up Central Grooves the route is excellent and we had a great day of climbing. Could this route be undergraded as it has repelled several strong teams now? Hopefully one day I will be back for another go to complete the route as per Don King’s premier ascent.

After a couple of rest days Jamie and myself headed into Observatory Gully on Ben Nevis to have a go at Brass Monkey (VII,8). This time it was me that took the tumble as I took the wrong line on the crux. I offered it to Jamie who powered his way up the same line allowing me to find the correct line offering very pleasant moves that make the route quite amenable. I then continued in the dark, up the nasty off width, on to Tower Ridge with Jamie following who emerged utterly exhausted, as he had forgotten his torch. I was very impressed with his tenacity on completing the route.

Many thanks to Jamie for a good few days and to Don King for making me feel better about not getting the top pitch of Satyr.”

1 Response to Trial by Satyr