Posted on January 7, 2014 by Simon Richardson 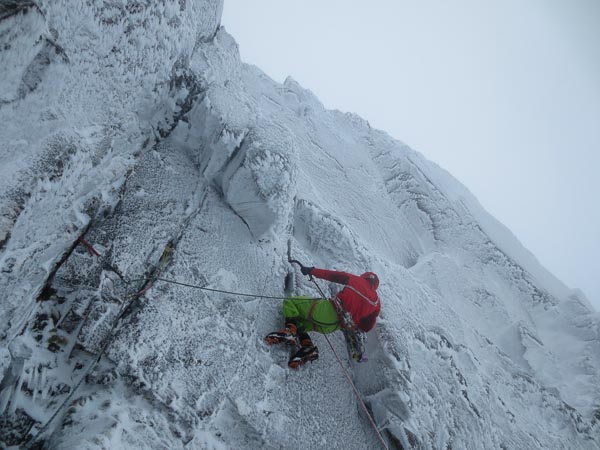 Neil Adams and Andy Inglis pulled off an important second ascent on Ben Nevis January 1, when they repeated The Brass Monkey (VII,8) on the east side of Tower Ridge. This imposing corner which bounds the right side of Echo Wall is a rarely climbed summer HVS, and was first climbed in winter by Pete Davies and Tim Marsh in December 2008. The first ascent turned into something of an epic when Pete fell off seconding after dropping his headtorch. Tim heroically prussicked the last pitch in total darkness dragging both rucksacks behind him, and the descent of Tower Ridge under heavy powder with only one torch between them, understandably took some time. They eventually reached the car park at 12.30am after a 19-hour round trip.

Neil and Andy, who have made an impressive start to their season with a string of powerful ascents, had a more mellow time. “It’s a good route and deserves more traffic, Neil told me. “It’s not too hard for the grade but probably graded right at VII,8. We ran the first two pitches together, which makes sense on 60m ropes as it’s easy climbing. [Interestingly, on the first winter ascent, Pete and Tim found these pitches quite tricky, with powder-covered rock and some committing moves on thin ice]. We had decent weather on the route but the winds really picked up during the day so the descent down Tower Ridge was in a full-on blizzard and fading light, which was probably the spiciest bit of the day!”