Posted on January 6, 2014 by Simon Richardson 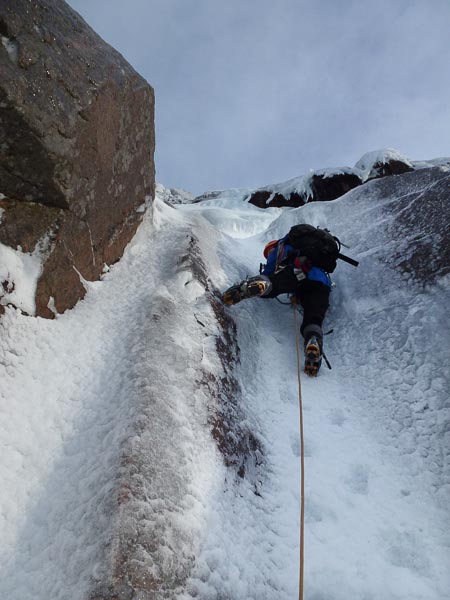 Susan Jensen leading the steep groove up towards the ice column through the roof on the new Direct Start (V,5) to K9 on Lurcher’s Crag. This increasingly popular crag, situated in the Cairn Gorm side of the The Lairig Ghru, has been a good choice in the prevailing weather systems of strong westerly winds. ((Photo Andy Nisbet)

“When it’s been raining cats and dogs, where else to go but Lurchers Crag,” Andy Nisbet suggests. “In fact the idea was born when Matt Griffin sent me a photo of the K9 area in order to ask if a line he and Adrian Dye had done by accident was in fact new. And it was, a line up the ribbed area left of the depression of K9 and now called Far from the Madding Crowd, was III,4.

While happy to help him, I was more interested in various icefalls around where I thought K9 went, wrongly as it later turned out. Jonathan Preston and I went in on a horrible New Year’s Day, with the wind and spindrift howling down the Lairig Ghru. It was another day where both of us wanted to turn back at various points, but never simultaneously, and the weaker one always conceded. In fact the wind was east of south, and when we reached the base of an ice column left of the main K9 fault, it was relatively sheltered and both of us were happy to be there.

I hadn’t climbed ice this season and my picks were blunt, so I was happy when Jonathan volunteered to lead. I found the vertical ice very strenuous but found the icy ramp above much more enjoyable, although the booming, obviously detached, crusty ice was clearly better when seconding. But I had recovered enough to lead a bigger but less steep icefall leading out left from the upper depression. The route was IV,5.

A thaw delayed a return and Jonathan was working, but a forecast of freezing brought Susan Jensen into the fray on January 4; the icicle through the roof above K9 was the obvious temptation. Of course forecasts aren’t always right, and it did seem very warm when we left the car. The lightest of crusts on the snow tempted us on but even when we arrived below the route, the crust was still on the thin side. Susan was keen to lead the steep bit so I teetered up the mushy snow fortunately to a good belay below a steepening groove. This gave Susan a precarious lead with fortunately a more solid exit. Her suggestion that a fall would only have led to a slide down the snow, wouldn’t have given me much comfort if I’d been up there. But the ice improved a lot above the groove and good ice screw runners led up to a short column through the left end of the roof system. From there we finished straight up the main depression on lower angled ice with the occasional bulge to reach the now icy hillside above. V,5 seemed the right grade.

I was about to write the route descriptions when Allen Fyffe (who did the first ascent of K9) got in touch about a rockfall in George, the classic Grade III in Coire Dubh Mor of Liathach. It now has an extra pitch and is a bit harder (see UKC), but I happened to mention about a direct on K9, which puzzled Allen. The original description mentioned a mixed traverse so I put two and two together and assumed it traversed back. But Allen soon confirmed that in fact it went left and climbed the icefall which Jonathan and I had finished up. So now I’ve two half routes to write up, and little idea what to say. Conditions were surprisingly good, not that it helps the route description, but the popular North and Central Gullies looked quite poor – too much water and not enough cold I assume.”

2 Responses to A Dog’s Life