Dark Angel on the Church Door 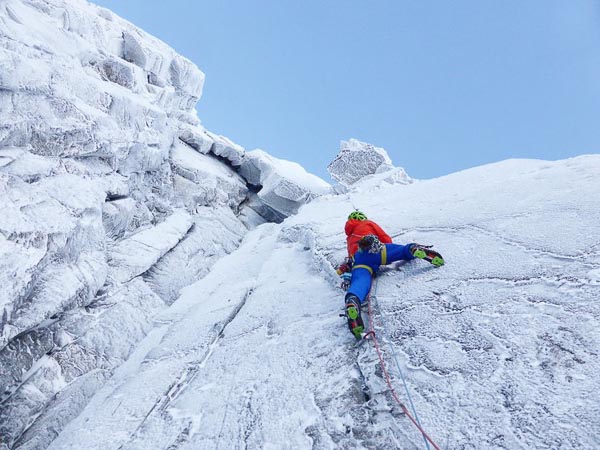 The clean-cut features and deep cracks of Bidean nan Bian’s Church Door Buttress have been a happy hunting ground for Scottish mixed climbers over the last couple of seasons. Un Poco Loco (VII,7), which finds its way through the great arch on the front face of the buttress (which gives the crag its name), has become something of a classic this winter, and following Greg Boswell and Guy Robertson’s ascent of Lost Arrow Winter Variation (X,10) in December, Matt Helliker and Pete Whittaker (of Wideboyz fame) made the second ascent of the spectacular Church Door Angels (VIII,9) in January.

During this ascent, Matt and Pete noted an unclimbed crack-line to the left so they returned with Nick Bullock on February 4 to attempt the line. The result was the three-pitch Dark Angel (VII,8), with Pete, Matt and Nick leading pitches one, two and three respectively. The route was very sustained, but the highlight was the thin crack up the vertical wall just right of the church door.

Matt described it as a ‘beautiful route’ and it is easy to see why! Full details can be found on Matt’s blog.