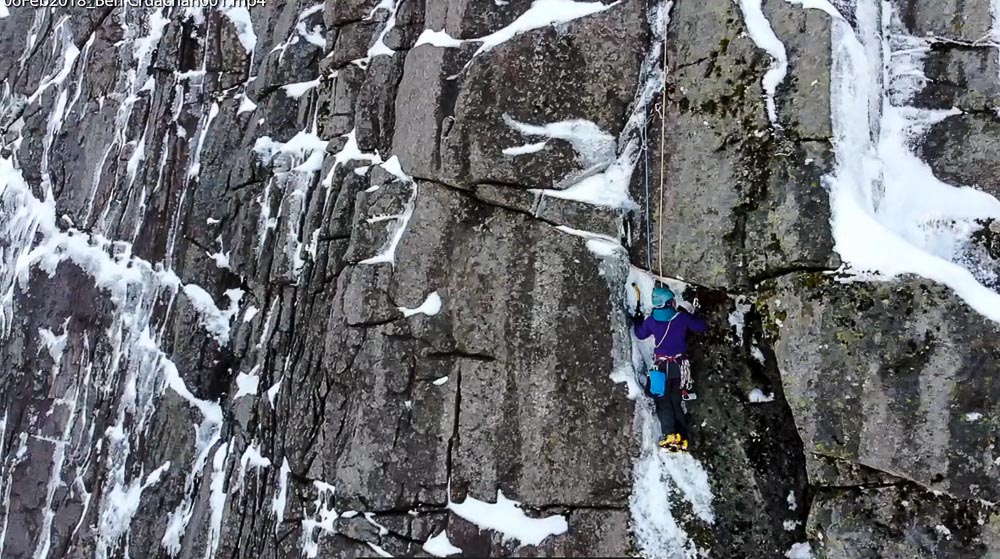 Amy Goodill following the final pitch of Century (V,5) on Drochaid Ghlas on Ben Cruachan. The exciting perspective of this shot was achieved by using a drone. (Photo Erik Lang)

Southern Highlands aficionado Stuart MacFarlane, together with Amy Goodill made the second ascent of Century (V,5) on Ben Cruachan on February 4. This three-pitch route is situated high up on the east face of Drochaid Ghlas. Being east facing it does not come as quickly into condition as the popular north-facing routes in Coire Chat but it does benefit from a slightly shorter walk.

What sets Stuart and Amy’s ascent apart however, is that a drone flown by Erik Lang filmed their climb. The edited video of the climb can be seen on

Drone footage provides a unique perspective and conveys the atmosphere of a place as well as giving a feeling as to what climbing on a high Scottish cliff is all about. So congratulations to Erik for creating such an interesting piece of footage and for Stuart and Amy for acting as willing models.

Ben Cruachan has a special place in my heart and I have fond memories of exploring the cliffs of Drochaid Ghlas with Roger Everett and Chris Cartwright many years ago. I climbed Century with Chris in February 2000 and it was so named as it was my hundredth new winter route. I’ve done a few more since of course, and it is always a delight when someone comes along and repeats one, even when the wait is 18 years!