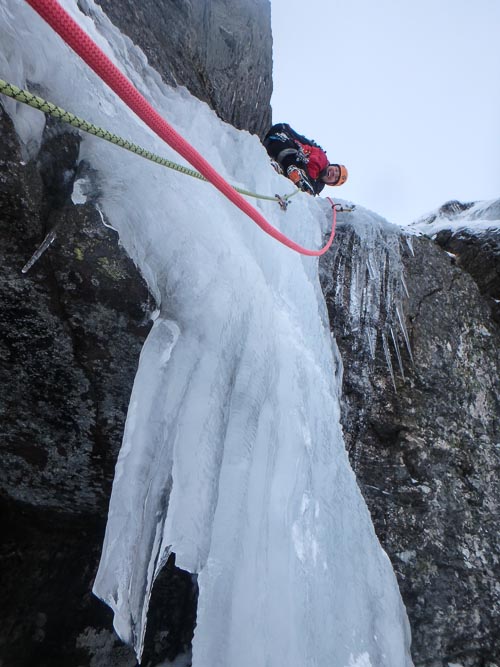 Icy times on Corrie Farchal in Glen Clova. Euan Whittaker at the top of ice shield to below the right-facing corner on pitch 3 of Silver Surfers (IV,5) during the first ascent. (Photo Martin Holland)

Euan Whittaker, Paul Warnock and Martin Holland climbed a new route – Silver Surfers (IV,5) – between Coffin Dodger and Over the Hill in Corrie Farchal in Glen Clova on February 7.

“We’d gone in to climb Silver Threads Among the Gold,” Martin explained. “But the bottom buttress had caught the sun, so we climbed this icy line to the right. Hence the name, which hopefully fits the theme of the crag. It links steep ice sections with easier ground and relaxed belay stances and gave some very nice climbing. The crux pitch climbs steeply up an ice shield to gain the right-facing corner, which is left of the ‘slot’ of Over the Hill. Easier ground leads to another cave belay under a large block.

Additionally, on February 6 we climbed Sun Rock Blues in Winter Corrie. We varied the third pitch by traversing right from the small cave above the line of Stalingrad. The traverse right was easy except for one memorably, awkward and precarious step transferring from the first upwards traversing ledge to the second.”