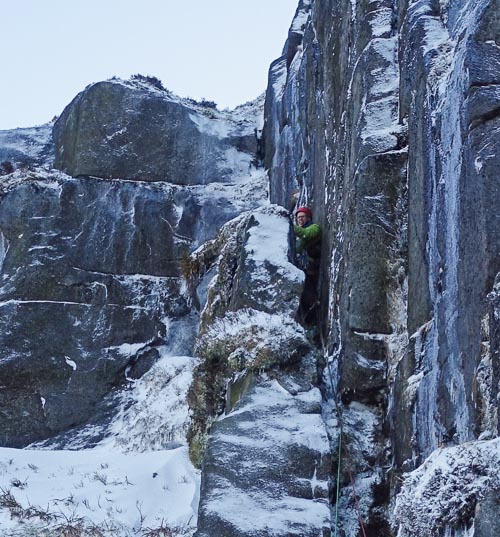 Andrew Fraser in the grips of the Vice during the first ascent of The vice Squad (V,5) in the Galloway Hills. The crucial offwidth can be seen above. (Photo Stephen Reid)

Stephen Reid and Andrew Fraser made an opportunistic ascent in the Galloway Hills on February 9. Stephen Reid takes up the story:

“Andrew Fraser and myself took an optimistic view of the weather last Friday (it was raining in Castle Douglas) and headed in to the rarely visited, but high crag of the Cauldron of the Dungeon on Dungeon Hill, where Fraser had previously climbed two winter routes with Ian Magill.

We climbed the obvious central groove to give The Vice Squad (V,5) named after the thrutchy chimney-flake on pitch 2, though the crux proved to be the final offwidth moves of the third (and last) pitch.”