Posted on February 15, 2018 by Simon Richardson 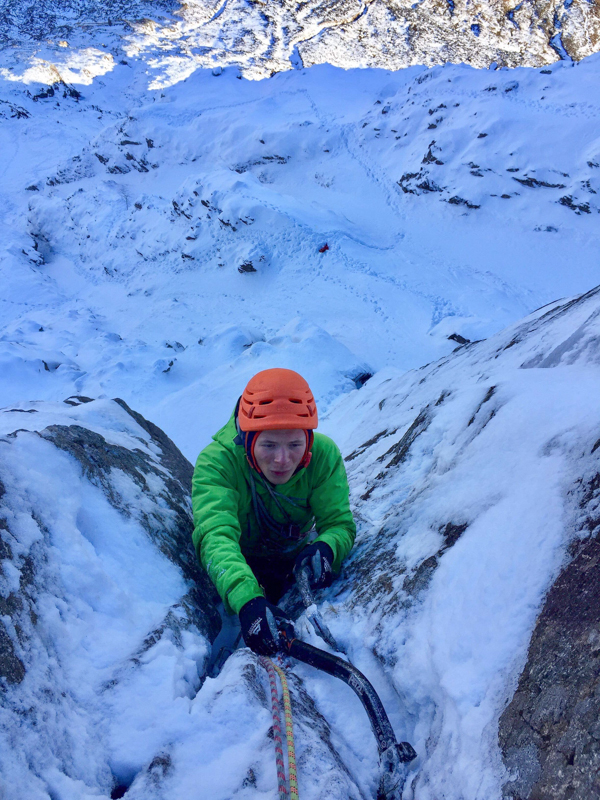 Calum Hicks at the top of the corner of Dingle (VII,8) on Buachaille Etive Mor during the first winter ascent. The route was repeated ten days later. (Photo Tim Miller)

Tim Miller is having an excellent winter. He has succeeded on a number of demanding test pieces such as The Secret, and in December he climbed a difficult new route on The Cobbler with Martin McKenna. On February 2, Tim added another notable route to his season’s haul with the first winter ascent of Dingle (a summer HVS) on Buachaille Etive Mor together with Calum Hicks.

“I’d heard that there were a few routes to the right of Engineers Crack that hadn’t been done in winter,” Tim explained. “Speaking to Neil Adams I found out that he had done Fracture Route, so Dingle seemed like the obvious choice. There’s an easy approach pitch, which Calum led, then I climbed the main corner at VII’8. It turned out to be much better than expected. Bomber hooks and tons of gear, the only catch being the very thin feet. There is good tat at the top to abseil down from, so combined with a short walk in, it makes an ideal bad weather day or consolation route. As for the grade, I was between VI,7 and VII,8 so originally settled on easy VII hard 7. Furthermore my friend Tim Oliver repeated it on February 12 and thought it to be about mid VII easy 8 and good fun climbing. So VII,8 suits it better anyway I think.”