New Grade VIII for The Cobbler

Posted on December 20, 2017 by Simon Richardson 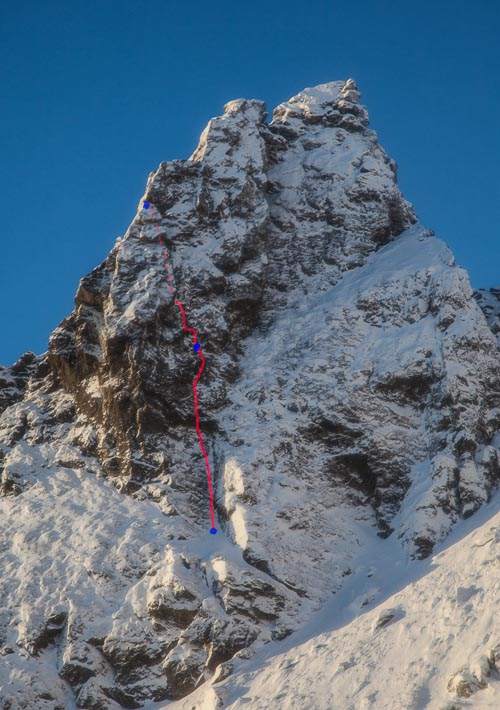 The spectacular South Peak of the Cobbler with the line of Punter’s Crack (VIII,9) shown in red. The dashed line shows the section that is shared with the modern classic Deadman’s Groove (VII,7). (Photo Martin McKenna)

Tim Miller and Martin McKenna created a new Southern Highlands test-piece on December 15 when they climbed Punter’s Crack (VIII,9) on the South Peak. This was a winter ascent of their 2016 summer addition ‘Davie Taenails’, but the route has been renamed because it is a far better winter climb than a summer one.

“It’s the first new winter route for both of us, so we are rather pleased,” Martin told me. “I’d spotted the line in 2016 while climbing North Wall Traverse, and then later that February, Tim and I climbed Deadman’s Groove, a route which Punters Crack rejoins in it’s upper half. Three months later in May, we were up on The Cobbler with a friend. Between us we had done a lot of the routes, so in a moment of idiocy, we decided to climb the line in summer, which was a moss induced nightmare.

We’d seen the weather was going to be good on Friday, and decided to go and have a look in winter, which it tuned out was a good call. The line is obvious from below. It climbs the initial turfy corner shared with North Wall Groove before continuing up on turf to below a horizontal roof. Tim managed to fiddle in some gear under this before committing to feet-off moves through the roof and then up the wall above. We belayed on a small ledge at the junction with Deadman’s Groove, and then I finished up the traverse and corner of Deadman’s groove to the top.

We’ve not done much around this grade so don’t have much to draw on, but we both reckoned around VIII,9.”

Simon Richardson is a passionate Scottish winter climber
View all posts by Simon Richardson →
This entry was posted in New Routes and tagged Martin McKenna, The Cobbler, Tim Miller. Bookmark the permalink.