Posted on December 22, 2017 by Simon Richardson 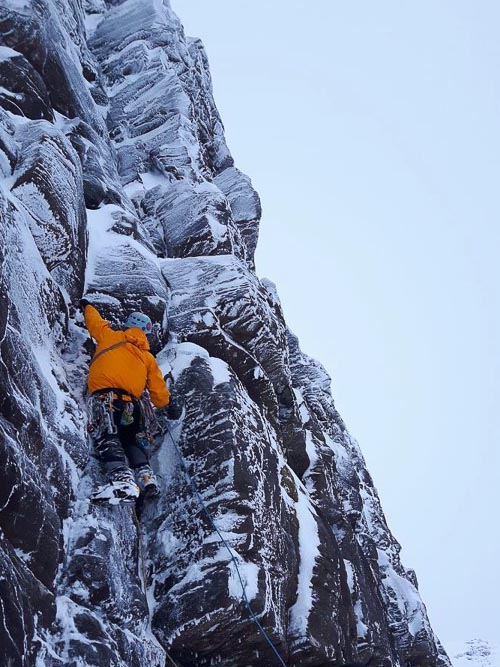 Erick Baillot setting off up the first pitch of Red Rag (VII,7) on Beinn Dearg in the Torridon Mountains. This intriguing route on one of the area’s least visited cliffs waited 17 years for its second ascent. (Photo Karl Atherton)

Dave Kerr, Erick Baillot and Karl Atherton notched up a significant ascent in the Torridon area on December 16 when they made the second ascent of Red Rag (VII,7) on Beinn Dearg. This route was first climbed by Roger Webb and Neil Wilson in December 2000, takes the steep icy groove that descends from the apex of the triangular cliff at the head of Choire Mhoir.

“We thought thinking it was going to be a fairly short outing,” Erick explained. “From the 1:50000 map, it looks like the crag lies just over 5km from the car park near Torridon House. Red Rag has been on our radar for a number of years, and low lying snow, a good freeze and wanting a mellow day (work has been a bit busy) ticked all my boxes.

We rolled up on Friday night with the van (I bivvied outside as the van only sleeps two comfortably) and set off around 6am. Not knowing the place particularly well, we decided that approaching from the southern slope in a rising traverse east to the dip in the ridge was the way forward… and it was the wrong call. Thigh deep to waist deep floundering, via dodgy snow slopes and worrying steps led us in 3 hrs 30 min to the crag. No official climbing had happened yet, but we were donning helmets, crampons and using two axes by the time the forced lined had brought us to within 50m of the summit of Beinn Dearg. None of us fancied crossing those gullies and slopes with such deep snow.

The climbing was short, but good, with one 25m pitch of Tech 7 leading to a ledge (gear high for the belay). The crag was very iced up and all the cracks were choked with ice making protection difficult and time consuming to arrange, so I will take the Grade VII tick. If the cracks were dry, the grade could go down to VI,7. Dave led the second pitch that had a 5m step of Tech 5 climbed using ice before 20m of easy ground and a last steeper step of 5m.

The way out was long as we decided to follow the ridge to the bealach west of Carn na Feola and drop into the glen of Coire Mhic Nobuil near Lochan a’Chaorainn and the long trudge back to the car park. Thankfully we had brought our secret weapon for the day ‘Dave The Plough Kerr’ who fresh from a summer of running, forged ahead regardless of snow depth.

Regardless, it gave a great new perspective to Torridon Mountains and the views north towards Beinn an Eoin were fabulous when it wasn’t snowing. We never saw anybody else other than the head torches of people walking the long way into Beinn Eighe and the rescue helicopter seemingly exercising and going around all the local corries. It was a great long day with plenty of solitude.”