Posted on December 14, 2017 by Simon Richardson 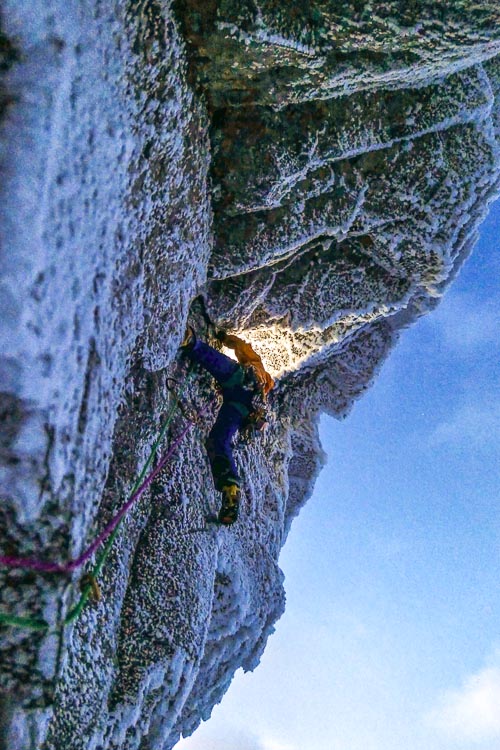 Guy Robertson leads the final pitch of Lost Arrow Winter Variation (X,10) by headlamp. This major addition, one of the most difficult mixed routes ever climbed in Scotland, lies on Church Door Buttress in Glen Coe. (Photo Greg Boswell)

Greg Boswell and Guy Robertson added another test-piece to the collection of hard winter routes on Bidean nam Bian’s Church Door Buttress when they climbed a winter version of Lost Arrow on December 11. The route was first climbed by Gary Latter and Paul Thorburn and is rated E3,6a in summer. Greg and Guy’s five-pitch winter version is called Lost Arrow Winter Variation and weighs in at a hefty X,10. The pair attempted the route last week but darkness forced a retreat. This time, an early start and a torchlight lead by Guy of the final pitch, resulted in success.

“I’ve been wanting to do a route based around Lost Arrow for a while now,” Greg told me. “The big curving corner littered with roofs was just shouting out to be tried! The route is a variation on Lost Arrow. It takes the first pitch of that route, then climbs the wall between Lost Arrow and Kingpin before moving back left to belay on the small ledge of Lost Arrow. We then climbed the steep turfy crack to the left of the main Lost Arrow crack and continued direct to the belay, instead of going right to climb the rib as for Lost Arrow.

The next pitch was climbed direct through the very hard and technical chimney straight above the belay to eventually gain a stance below the smaller of the two roofs. The last pitch was a ‘go for glory’ into the darkness over the last roof. World class!

The route was very sustained with multiple tech 9 and 10 pitches found throughout. The crux was probably the second pitch through the first big roofed area, and then everything above was still very hard and sustained, with the final roof being crazy hard regardless of the amount of climbing already done to get there!”

Lost Arrow Winter Variation is a significant addition, and the highest graded winter new route to be climbed in Scotland since Greg’s ascents of Intravenous Fly Trap and Banana Wall in Coire an Lochain in February 2017 and 2015. Earlier in the 2015 winter, Greg and Guy had made Scottish winter climbing history with a hat trick of new Grade X routes – The Greatest Show on Earth, Range War and The Messiah – all climbed on sight and over a 15 day period.