Posted on December 15, 2017 by Simon Richardson 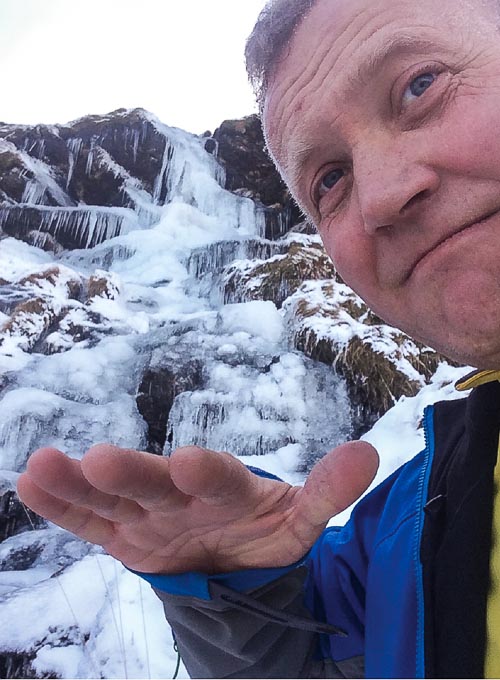 Jon Foden contemplates the first pitch of Fox Gully (III,4) on Ben Lui. This was the start of an excellent day that entailad 400m of ice climbing. (Photo Jon Foden)

Jon (Nettle) Foden had an enterprising day climbing and exploring Fionn Coirien on the north side of the Ben Lui group on December 11.

“Yesterday I was in Glen Lochy and my plan was Munro bagging with Beinn Chleibh in mind,” Jon explained. “But I always like to take in summits in a different way so I took a pair of tools and a helmet just in case. The map indicated a steep north-facing corrie and the picture in the SMC Munro guide suggested that there might be easy gullies leading to the top. From the car park there appeared to be some early season ice around… worth a punt. The result was two possible new routes – Fox Gully (III,4) is a bit of esoteria, quite low, but subsequently with a short walk in. Shift Work (IV,4) is more of an outing with a finish close to the summit of Beinn Chleibh.

The 150m-long Fox Gully is actually on the western flank of Ben Lui and follows a gully which sweeps around the right‐hand side of a rocky buttress. It’s currently a lovely, icy outing, but will probably bank out a bit as the snow comes in. Even with the cold of the last few days the water is running and it’s a bit chewy. But here’s plenty of solid ice and turf, which made a fun ascent. As I approached, a fox ran out of the gully, hence the name.

Coming into Fionn Coiren from this height I was rewarded with a great view of the cliffs below Beinn Chleibh. There were about six obvious icy lines, which could each give a rewarding expedition. However, several of them sit below bowls that would no doubt be an avalanche danger as snow builds, although this isn’t a concern in current conditions. Shift Work (IV,4) had a 250m continuous line of ice to within a few feet of the top, and I topped out close to the summit. It was a belter! This makes me think it may well have been climbed before, but I can’t find any accounts of anything at all in the corrie. The line is less likely to be affected by avalanche, and the name relates to the reason why I’m out climbing on my own on a Monday!”