From Our Derbyshire Correspondent

Posted on December 13, 2017 by Simon Richardson 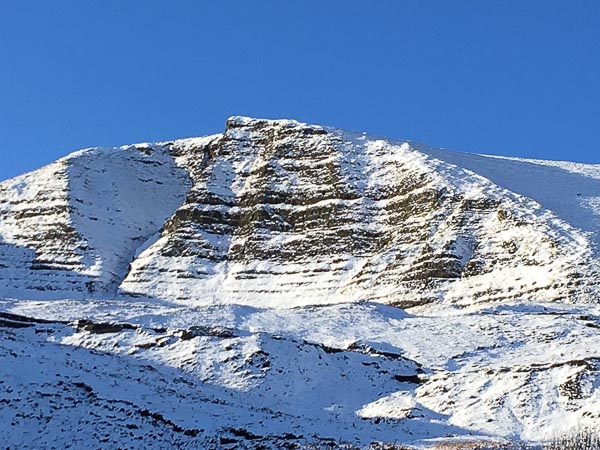 The south-east face of Mam Tor in the Peak District. Blue John Rib (III), which follows the left edge of the central buttress, has seen several ascents over the last few days. (Photo Jeremy Windsor)

This blog is primarily about Scottish winter climbing, but occasionally news comes in from other areas that is just too good not to share. Scottish winter enthusiast Jeremy Windsor, who lives in Matlock in Derbyshire writes:

“Just letting you that Derbyshire’s premier mixed climbing venue has been ’in’ these last few days. Known as the ‘Shaking Mountain’, on account of its poor rock, shale and mud strata, the routes on Mam Tor rarely come into condition. And when they do, their south-east aspect means that they’re stripped by the weakest of sunlight.

Nevertheless this week, the standout route of the area – Blue John Rib (III) – saw ascents by a handful of enthusiastic teams. So impressed by its three nerve-racking pitches, I followed up a night ascent with a quick repeat the next morning (December 11). Could it be, as I struck frozen mud and shale for the second time in twelve hours, that I’d found a route worthy of inclusion in, ‘Chasing the Ephemeral Vol II’?

NB – Please note that a Derbyshire Grade III means that the route is never easier than III and in reality will be considerably harder!”