Posted on December 13, 2017 by Simon Richardson 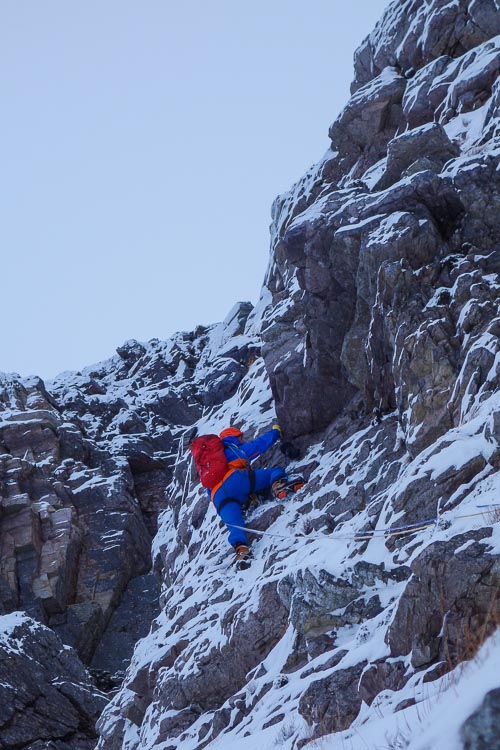 Roger Webb negotiating a steep step during the first winter ascent of the South Rib (III) of Arkle in the far North-West. This prominent feature was first climbed by Tom Weir and Arthur Macpherson in May 1951. (Photo Simon Richardson)

Neil Wilson had long admired Tom Weir and Arthur Macpherson’s route up the 280m-high South Rib of Arkle, the Corbett just south of Foinaven. Weir and Macpherson were amongst the first to explore the climbing potential of the Foinaven group in the Far North, and their line on Arkle takes a very prominent line visible from the A838 road at the west end of Lock Stack. Neil thought it would make a good winter route, but facing south-west with a starting level of 300m, it was going to require some very specific conditions.

The requisite recipe of cold temperatures, heavy snow blown on a northerly wind, and a cloudy forecast to prevent the route stripping in the sun all came together on Sunday December 10. Neil, recruited Roger Webb and I for the project, and we enjoyed an excellent six-pitch climb up the rib that is defined by a deep gully to its left.

Unfortunately the cloudy weather was more continuous snowfall at times, but it did not detract from the fun of climbing a classic mountaineering Grade III in an unusual location. And rather surprisingly, our ascent may well be the first winter route to be recorded on this very distinctive peak.