Rescue Mission in the Galloway Hills

Posted on December 12, 2017 by Simon Richardson 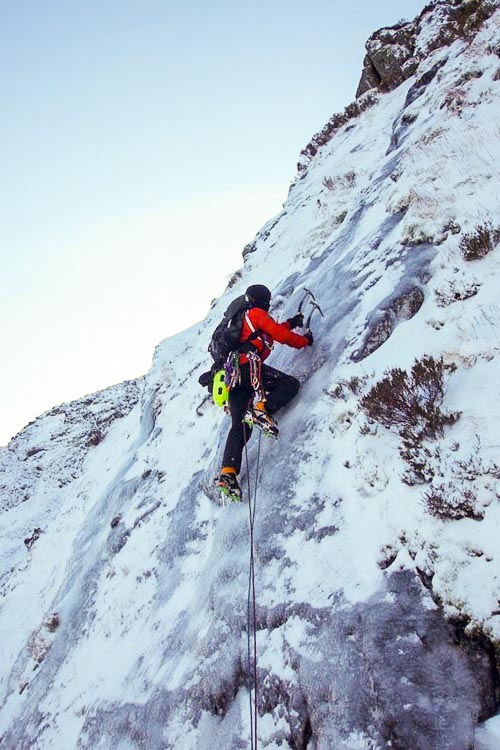 Ian Dempster starting up Frigidare (IV,4) in the Galloway Hills during the first ascent. The 205m-long route lies on the buttress to the right of Better Gully in the Rhinns of Kells. (Photo Stephen Reid)

Ian Dempster and Stephen Reid made good use of the cold conditions in the Galloway Hills on Sunday December 10 with the first ascent of Frigidare (IV,4) on Fridge Buttress in the Rhinns of Kells. The climb starts left of Andrew Fraser and Ian Magill’s Fridge Magnate (III) of 2011 before finishing just right of it on the final tier. An unexpected turn of events however, meant the climb turned into something of a rescue mission.

“It was bitterly cold, but still and clear with a good covering of snow,” Stephen explained. “It was a stunning day to be on the hill, but also meant that crampons, ice axes and walking poles balled up continuously. The route consisted of shortish harder sections interspersed with easier scrambling.

Only Ian completed the final pitch due to a dog falling from halfway up the crag and landing at my feet (an unusual and disconcerting experience when winter climbing). The dog seemed unhurt and picked itself up to join its two mates who were busy chasing goats, shortly to be joined by their two teenage owners who had managed to get themselves down the crag but ‘could na gae thersels ba’ oop agin’.

These lads had no crampons, ice axes, head torches or even gloves (at 3.30pm in the afternoon in December!) – fortunately I had two spare pairs of gloves. Ian reached the top of the final pitch and we abandoned the route and several bits of gear while I escorted the lads and dogs round the edge of the buttress and up on to the ridge. A long descent in the gloaming followed to join John and Linda Biggar who had been watching the whole thing unfold with bated breath from the edge of the forest!”

4 Responses to Rescue Mission in the Galloway Hills