Posted on December 8, 2017 by Simon Richardson 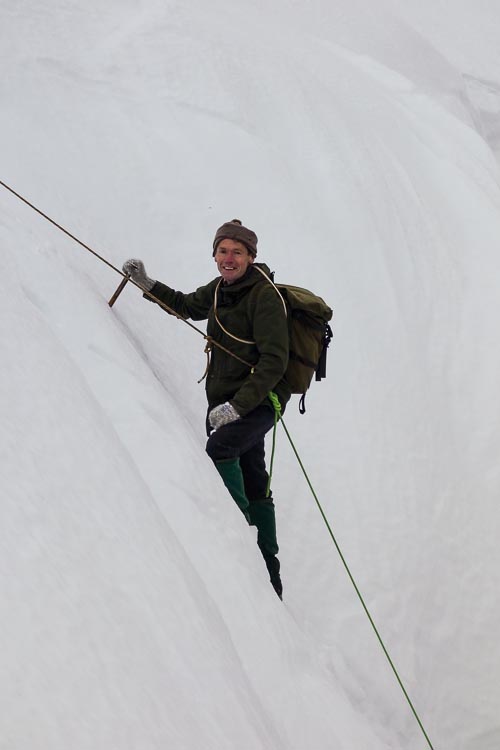 Graeme Morrison emerging from the top of Hobnailers’ Gully (I/II) on Creagan Cha-no. Graeme was perfectly kitted out for a traditional gully climb being dressed in tweed trousers, woollen hat and ventile jacket. He used a wooden ice axe with the rope tied around his waist. (Photo Simon Richardson)

It is traditional for the President of the Scottish Mountaineering Club to lead a walk on the Sunday after the annual dinner. As the event takes place in early December, lousy weather often dictates a low level affair, although some presidents have been lucky enough to complete a round of Munros. I am currently President of the SMC and thought it would be rather fun to stretch the concept of a ‘walk’ and attempt an easy winter climb instead. And even better, if it could be a new one!

The SMC dinner was held in Carrbridge this year, which gave the option for a route on Creagan Cha-no in the Northern Cairngorms. Over 50 new climbs have been added to the crag since it was first developed seven years ago, but these have mainly focused on mixed lines and buttresses. Fortunately there was an attractive gully that had not been recorded – we just needed conditions and weather to make an ascent feasible.

The cold and snowy weather last week meant that Creagan Cha-no was collecting its fair share of snow and the turf was freezing well, but it was also in the lee of the wind and the approach down Recovery Gully was endangered by windslab. We needed a thaw and re-freeze to consolidate the snow. Then as if by magic, the stars aligned and a quick thaw on Saturday was followed by sub-zero temperatures on Sunday morning (December 3). By the time we were at the top of the crag at 11am (it was a good dinner) the snow had hardened up rather nicely.

We climbed the two-pitch route in a single rope of 18 people. With some folk having harnesses, and others simply tying into bights of rope, the ropework was a little unorthodox at times, but always safe. It took little over an hour to climb the route and was reminiscent of the Victorian era when the SMC pioneers would venture forth en masse and climb great routes of derring-do.

Whilst our ascent did not match the deeds of the pioneers it was very enjoyable – I have never seen so may broad smiles on top of a route before. Once we were all up we visited the elusive El Alamein bothy (that was ordered to be removed following the Feith Buidhe tragedy in 1971 but is still there) before ambling happily back to the car park.