Spare Rib on An Teallach 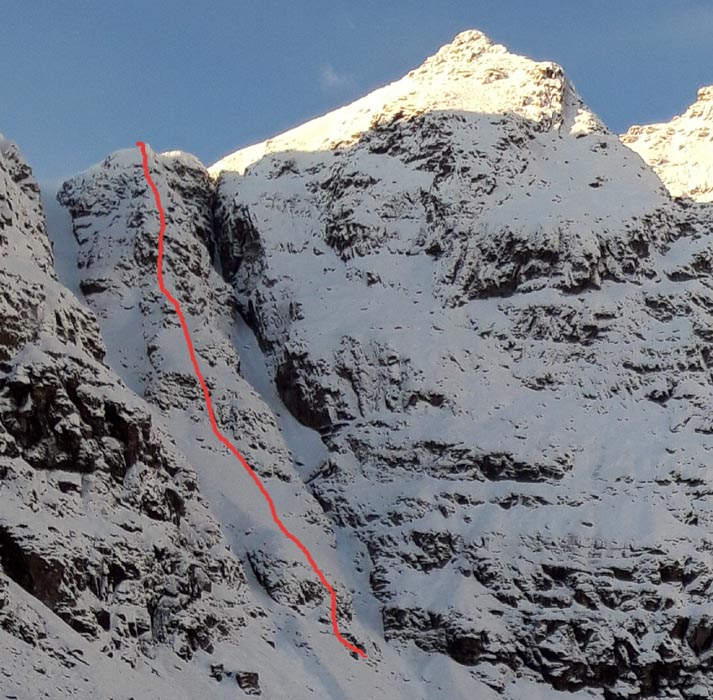 The line of Spare Rib (II/III) in Toll an Lochain on An Teallach. It is flanked either side by Central Gully (I) and Chockstone Gully (I). (Photo Ian Stennett)

With the Scottish mountains still lean from the post-Christmas thaw, it is difficult to remember that the Highlands were covered in deep snow during the third week in December.

Ian Stennett climbed An Teallach from Toll an Lochain on December 18. To make the going easier in the deep drifts, Ian took a line up the broad rib that sits between Central and Chockstone gullies.

“Spare Rib (II/III) is a fairly straightforward climb in the bottom half with sections of little difficulty or interest,” Ian told me. “But, as height is gained, the rib narrows and the exposure increases to leave a climb that picks its way through rock and turf amid spectacular scenery, finishing on a very lofty perch on the bealach.

It was the highlight of what was a very long and tough day, the snow across the ridge was highly time consuming. I also took a small slip, tore my trousers and punctured my calf with a crampon as fatigue set in – so it is nice to have a new line in the corrie as some sort of reward!”

Postscript: It looks like the ubiquitous Andy Nisbet got there first and climbed the line in February 2012 with Jonathan Preston. They called the route Narrow Buttress and graded it II. See comments below and thanks to the eagle-eyed Ewan Lyons for pointing it out.

Simon Richardson is a passionate Scottish winter climber
View all posts by Simon Richardson →
This entry was posted in New Routes and tagged An Teallach, Ian Stennett. Bookmark the permalink.

2 Responses to Spare Rib on An Teallach