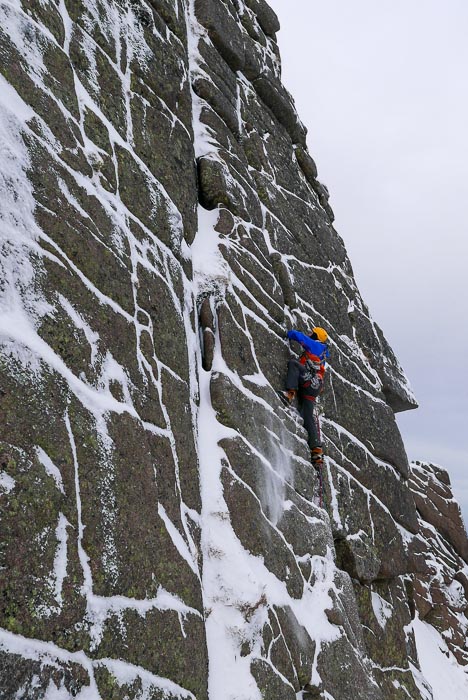 There is an attractive single pitch crag sitting under Cnap Coire na Spreidhe on Cairn Gorm. It was first explored in summer 2012 by Rik Higham, Raphael Bleakley and Gwilym Lynn who climbed the prominent line of Nethy Crack (VS 4c), the central crack line splitting the front face of the cliff.

With a base of 1100m Cnap Coire an Spreidhe is a promising-looking venue for lean winter conditions. It had been on the radar for years, and Roger Webb and I finally visited it last January. We climbed Dinner Date (V,5), the fault line left of Nethy Crack, followed by The Late Show (IV,6), a deep chimney cutting deep into the right flank of the cliff. The main prize however, was a winter ascent of Nethy Crack, but we knew we would have to wait patiently for the correct conditions. The crag is often covered in deep rime and we’d had a tough time on Dinner Date with difficult to protect icy cracks. Ideally, we needed the cliff draped in powder following a deep thaw.

On January 9, Nethy Crack was looking good. The post Christmas thaw had cleared the rime, and recent cold north-westerly winds had helpfully blown fresh snow over the plateau to settle on the east-facing Cnap. And, most crucially, the cracks were free of ice.

The route looked intimidating from below and it was difficult to judge how hard the climbing would actually be. Roger started up a turfy groove with an awkward move through an overlap, which provided a more direct start to the summer line that gains the crack from the left. Above, the route provided a magnificent surprise – it was considerably easier than it looked! Whenever a move appeared difficult, footholds would materialise and the deep crack willingly accepted tools and cams. We knew the pitch would eat up a single rack, and had doubled up on large cams – Roger placed the 3.5 four times although he did move it up twice.

The summer route finishes direct thorough a small overhang, but Roger took the natural winter line trending right to the arête and finishing up a steep vegetated wall. The winter version of Nethy Crack weighs in at V,6 and is a superb little route. With time to spare, I then led Brain Melt (V,7), the burly chimney to the left of The Late Show, which is guarded by a difficult smooth corner which provided the technical crux. The route was so named because after his superb performance on Nethy Crack, Roger lost concentration when climbing on the blunt end of the rope, and could not match his previous composure and finesse. The unheralded hero of the day however was Gary Kinsey, who manfully held the ropes and then glided up both routes with elegance and style.