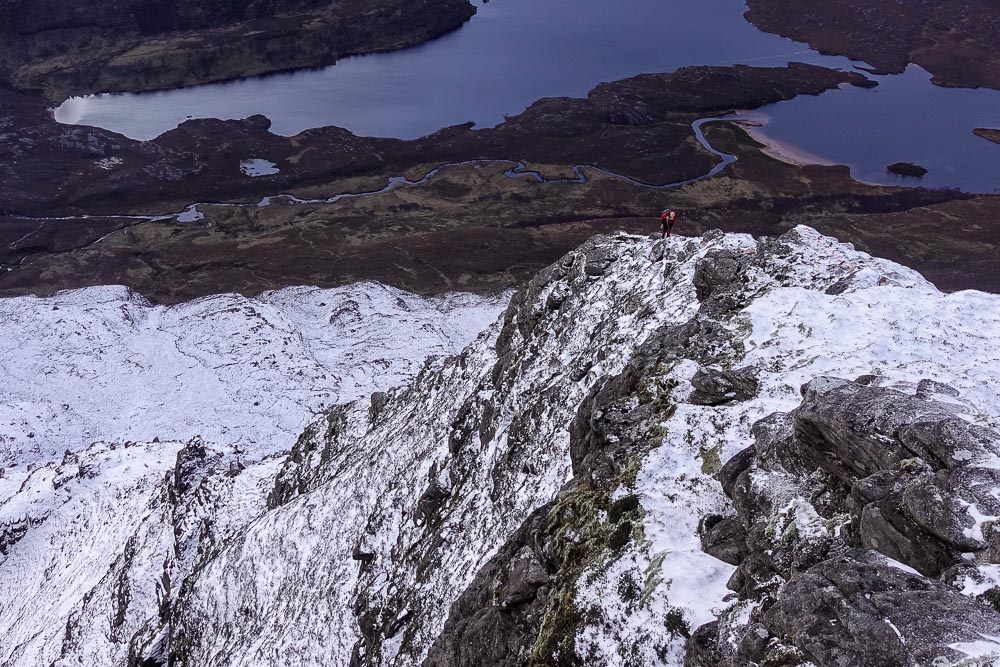 Iain Young and John Higham pulled off a superbly-timed piece of exploratory winter mountaineering yesterday (January 28) when they made the first winter ascent of Table Rib (III,4) on Cul Mor. Iain takes up the story:

“In the last few days, it’s been good to see winter back. Luckily John Higham and I had set aside a few days this week in which to try to get something done and yesterday we went back to Cul Mor for a winter ascent of Table Rib.

We had talked about this as a possible objective for a few years, but the southerly aspect and low start meant we needed a cold snap, snow to low levels in the west and an early season day so that the sun doesn’t get too high. We figured that we had the right ingredients yesterday and so it proved. A fairly arduous approach via the gorgeous little Loch an Doire Dubh led to the approach gully and the start of the “slimy slabs”.

While they were dribbling with (unusable) ice these gave John a few nerve-wracking moments on the way to the ridge line as the turf wasn’t always fully frozen and there were no runners (these turfy slabs catch all the morning sun going). Above, some short technical moves on much improved turf and the odd hook move led to the top of the Table in around 400m of pitched climbing and moving together.

The summer route seems to have been followed more or less in its entirety though the final sting in the tail was climbed via a steep turfy groove to the left. A superb expedition in a wild part of the country. As to the grade, III, 4 we thought. On the other hand, I’ve soloed Tower Ridge in winter but I would not have soloed this! “