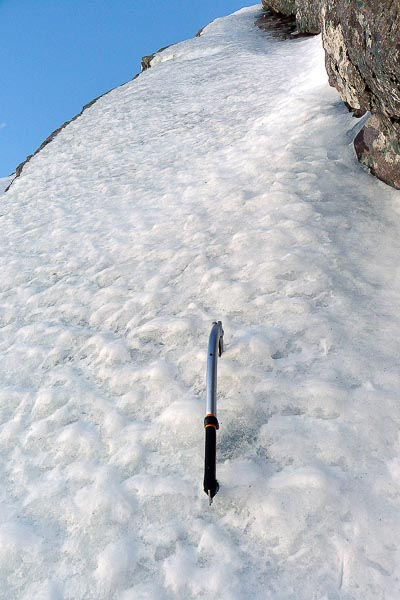 Looking up the line of Total Kheops (VI,6) on the left side of the upper part of Minus One Buttress. This outstanding line is one of the most aesthetic-looking thin face routes added to Ben Nevis in recent years. (Photo Remi Thivel)

Remi Thivel has provided more details about his inspirational run of routes on Ben Nevis climbed with Laurence Girard in early March.

After warming up on Minus One and Minus Three gullies on March 10, Remi and Laurence had an outstanding day on March 11 when they started up Astronomy, crossed over to the Basin and then made the second ascent of Spaced Out (VII,7) before finishing up the icy wall left of the Orion Direct exit. Climbing solo, Remi then made the second ascent of a more direct version of Shooting Star (VI,6) thinking it was Urban Spaceman.

The following day (March 12) they made an early repeat of Point Blank (VII,6) before adding Total Kheops (VI,6) on the left flank of Minus One Buttress. This beautiful-looking corner is very rarely iced, and is one of the most compelling new ice lines added to the Ben in recent years. Remi and Laurence’s tally of four outstanding routes over two days is one of the most impressive displays of thin ice climbing the mountain has ever seen.

The pair was assisted by the outstanding conditions that week, but not surprisingly, Remi knows Ben Nevis well and this was his ninth trip to the mountain. “I decided to climb the dihedral [of Total Kheops] when I got to the bottom just because it looked very nice,” Remi told me. “I didn’t know it had never been done before. The ice was thin but sticky and very good, and it is not very steep. I did not know my client before the trip, but she was very motivated for anything so we just climbed all day and every day. Such beautiful conditions, we had to take advantage of it!”