First Blood to Nisbet and Yearsley for New Winter Season

Posted on November 5, 2014 by Simon Richardson 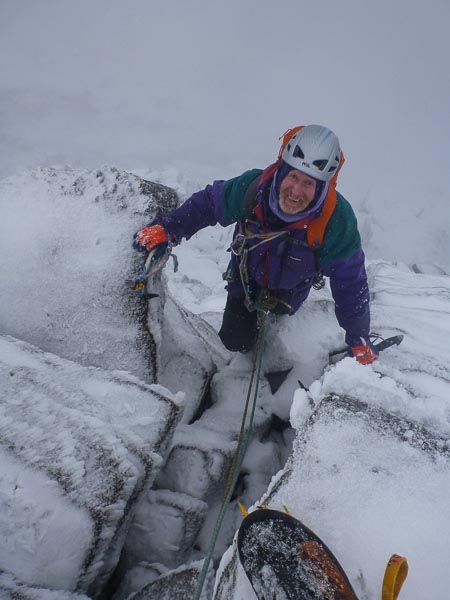 Andy Nisbet topping out on Just A Spot O’Sightseeing (IV,6) on the Mess of Pottage in the Northern Corries. (Photo Simon Yearsley)

Andy Nisbet and Simon Yearsley succeeded on the first winter route of the season today (November 5). Simon takes up the story:

“It’s been a pretty warm autumn, and although I’ve had a growing sense of excitement as I always do at this time of year, it’s been tinged with growing frustration that it just hasn’t got cold. So, it was good to see the winds turn to the north this week, and things start to get white! There was lots of fresh snow on the Ben and the higher Cairngorms from Monday, and a few rumours circulating about folk getting out, but for me, the weather didn’t really look like it was playing ball until Wednesday… and I’ll admit it, I was really tired after the drytooling competition at Ice Factor on Saturday. So, a few hurried texts with Andy on Tuesday and we had a plan – a very simple plan… head into the Norries and see what was white and climbable. Harry Holmes (far stronger than me and so not as tired after the comp) texted me saying he had the same idea, so it looked like it might be a sociable day too.

It had snowed pretty hard overnight, and with a few squally snow showers on the way into Coire an t-Sneachda, all the cliffs in the coire were wonderfully white. We headed over to Mess of Pottage as I wanted to look at the summer route – Just A Spot O’ Sightseeing. This 90m Severe was done in 2006 by Olivarius and Hughes, and climbs Hidden Chimney Direct, before moving over easier ground, then slabs and cracks to a steeper finish in the buttress right of Hidden Chimney. This part of the Mess of Pottage is very well travelled, and local guides often take a variety of different lines in the upper section if Hidden Chimney is full of climbers… Andy thinks he’s done Hidden Chimney Direct at least 15 times! The summer route Just a Spot o’ Sightseeing takes a line well suited to early season conditions, being rockier than the easier lines to its right, which are grouped together as Jacob’s Edge. As such, it seems worth describing and naming as a winter route. Later in the season it can be as easy as Grade III, this grade depending on Hidden Chimney Direct Start banking up. Who did it first is lost in the snows of time.

The line actually fits together really well as a winter route, especially in early season before things bank out: the first pitch is Hidden Chimney Direct which as it often is in lean verglassed conditions, felt about IV,6, then an easier section followed by some fun slabs and cracks; and the finish up the steeper buttress proving much easier than it looked, and in a great position. It’s also a bit longer than the summer 90m – the pitches were 50m, 45m and then 25m, giving 120m of nice climbing.

Harry and his partner Rob Taylor also had a fun day with an ascent of Honeypot. We all finished just after lunchtime, and afterwards, the ever-keen Harry and Rob went down to Newtyle to put some hours getting even stronger on the drytooling route, Too Fast & Furious. Andy and I went to the cafe and ate cake…

Also taking advantage of the short weather window were Simon Davidson and Kevin Hall.  Round the corner in Coire an Lochain, they had the corrie to themselves and climbed The Hoarmaster in, to quote Simon, ‘Good early season nick, rime and frozen blocks – always worth a punt this time of year before the cracks get choked.’

Looks like the weather’s warming up again over the next few days, so it just goes to show, with early season stuff, you just got to grab it when you can!”