Posted on November 13, 2014 by Simon Richardson 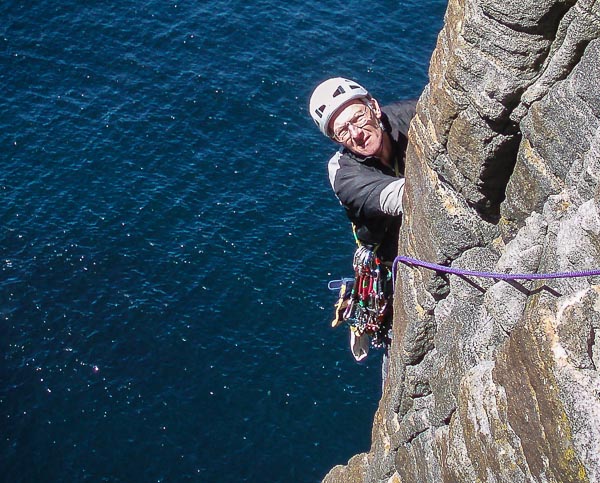 Colin Grant climbing the great Scottish sea cliff classic Prophecy of Drowning (E2) on Pabbay in the Outer Hebrides. Colin climbed at a high standard in summer and winter for over fifty years and was an inspiration for all that knew him. (Photo courtesy John Hutchinson)

In September, Glasgow climbers were shocked and saddened by the sudden death of Colin Grant. Colin had been a lifelong mountaineer with a seemingly ageless capacity for climbing and hill walking. Colin was well into his third round of Munros and still climbed to a high standard. In his mid sixties he made ascents of modern Scottish classics such as Prophecy of Drowning (E2) on Pabbay and Gemini (VI,6) on Ben Nevis – big impressive routes that climbers many years younger would be delighted to add to their tick list.

In the 1970s Colin pioneered winter climbing in the Bridge of Orchy hills, often in the company of Colin Stead. The two Colins added the classic lines of Slow March and Far West Buttress to the North-East Coire of Beinn and Dothaidh, and were first to climb routes on Meall Bhuidhe (The Circus) and on Creag Coire an Dothaidh (BO Buttress ascended the same day as Salamander Gully by Ken Crocket and John Hutchinson). Colin also paired up with Ian Fulton to climb Second Coming, the first winter route on the very impressive Creag an Socach, as well as adding the rarely climbed Central Grooves to nearby Ben Cruachan.

Further afield in the Central Highlands, Colin made the first winter ascent of Slab Rib Variation on the First Platform of Ben Nevis with Colin Stead and added the quasi-classic Turf Walk to Aonach Mor with Roger Everett. Colin also visited the remote and enigmatic Maiden Crag on Ben Alder with Chris Rice and Roger Webb to add Nightshift (probably unrepeated).

A committed family man, there was far more to Colin than climbing. Gifted academically, Colin studied Chemical Engineering at Strathclyde University and then worked in industry for a time, before returning to Strathclyde as a lecturer. He became head of the Chemical Engineering Department in 1987 and held that post for 20 years, making him the longest serving departmental head in the history of the University, before becoming the Dean of the Engineering Faculty. Colin was awarded many professional honours and was highly respected by colleagues and students alike.

Colin was not one to suffer fools gladly, but he would always challenge with a mischievous twinkle in his eye. When I was in my mid-twenties I remember him bending my ear on a journey up to Creag Meagaidh that I was paid too much (rates for Petroleum Engineers are typically more than Chemical Engineers), but on the hill he was fast, focused and good company. After climbing North Pillar (the only route on the Post Face that Colin hadn’t climbed) in double quick time, we were wondering what to do next when Colin suggested that we attempt the imposing feature to the right of Trespasser Buttress in the Inner Corrie. Buttons (III,4) was one of my first new winter routes in Scotland, and full credit goes to Colin for spotting the ingenious line that was far more straightforward than it had any right to be.

Colin was a stalwart of the Rannoch Mountaineering Club, organising all their overseas climbing trips, and was a role model for not growing old. Somehow, Colin gracefully maintained the energy and capacity of youth and it is difficult to believe that he is no longer with us. I for one will miss Colin at the SMC dinner next month, as he always made a point of seeking me out for some playful banter and figurative poke in the ribs. Colin will be greatly missed.

Simon Richardson is a passionate Scottish winter climber
View all posts by Simon Richardson →
This entry was posted in Commentary and tagged Colin Grant. Bookmark the permalink.