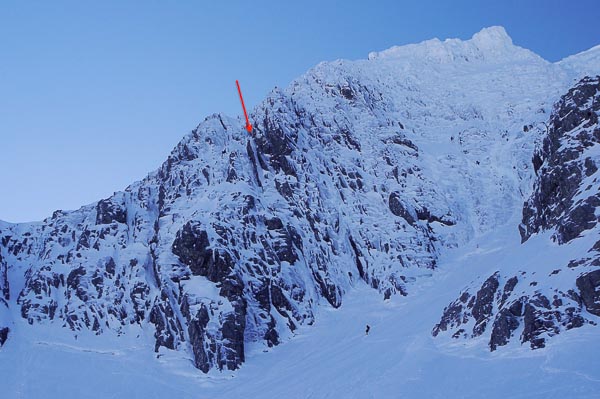 The Minus and Orion faces on Ben Nevis on 12 March 2014. The red arrow shows the icy V-groove on Minus One Buttress climbed by Remi Thivel and Laurence Girard. A perfect combination of heavy snowfall, short thaw and freeze brought the thin face routes on Ben Nevis into the best conditions in living memory, but unfortunately they only lasted three days before being swept away with warm air from the Atlantic. (Photo Mike Pescod)

I’ve been trying to find out more details on the extraordinary run of routes climbed on Ben Nevis by a French team staying at the CIC Hut a couple of weeks ago. I was climbing on The Ben on Sunday so was able to extract the following details from the hut book.

Laurence Girard and guide Remi Thivel started their campaign on March 10 with ascents of Minus One and Minus Three gullies. The weather was cooling down that day after a quick thaw over the weekend had transformed the huge amount of snow lying on the Orion and Minus faces into perfect neve.

On the morning of March 11, Remi and Laurence started up Astronomy, crossed over to the Basin and then climbed a line between Space Invaders and Journey into Space before finishing up the icy wall left of the Orion Direct exit. Although this line is similar to Shooting Star (climbed by Robin Clothier and Rich Bentley last season), to my knowledge this link up had not been climbed before, and the pitches on Orion Face may be new.

In the afternoon Remi then made a remarkable solo on the Orion Face. He started up Urban Spaceman (which only saw its first repeat last year) and continued up the chimney of Zybernaught to finish, taking 40 minutes in all.

The following morning (March 12), Remi and Laurence climbed Point Blank on Observatory Buttress, which Remi wrote was “fantastic and exposed.” In the afternoon they started up Minus Two Gully, but instead of stepping left into the upper gully after the first two pitches, they continued up and into the clean-cut V-groove on Minus One Buttress left of the crux corner of Subtraction. This outstanding feature is rarely iced and was unclimbed in either summer or winter. “The dihedral was fantastic’” Remi wrote. “It was 35 metres-long, 75/80 degrees of thin ice, and protected by a C3 yellow and a C4 green.”

The perfect conditions disappeared overnight as warm front swept in from the south-west, so Remi and Laurence concluded their remarkable haul of routes with an ascent of Match Point in the rain before finishing up Observatory Buttress Direct climbed on wet snow.

It was raining and windy the following morning, but they put it to good use – “ A long lie-in and a good breakfast…”