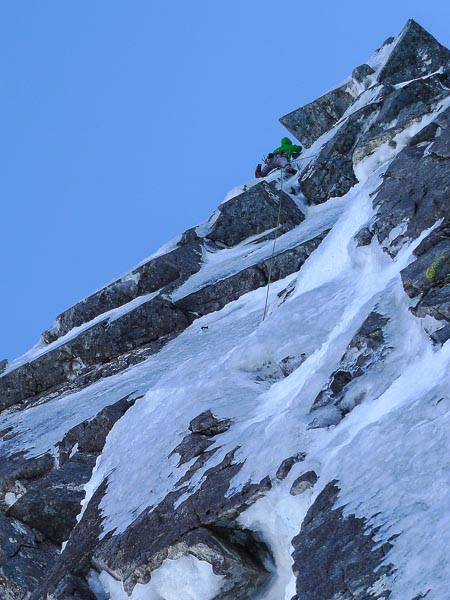 Murdoch Jamieson nearing the top of Minus One Superdirect (VII,6) on Ben Nevis. This was the first time the direct line up the centre of Minus One Buttress had been climbed in winter, although this pitch had previously been climbed by Guy Robertson, Pete Benson and Nick Bullock four years before. (Photo Iain Small)

Following their new route on the Astronomy face of Ben Nevis, Iain Small and Uisdean Hawthorn had an even more outstanding day on March 12.

“Wednesday was another stunning day with a good frost and rock-solid snow,” Iain told me. “Murdoch [Jamieson] joined us and we followed the line of French teams heading back to the Minus and Orion faces – wise choices given the monster cornice/seracs threatening most other areas. Observatory Buttress also seemed safe, and we spotted a team on a very fat-looking Point Blank.

With so many quality lines on offer we thought hard and settled on the line of Minus One Buttress as the most aesthetic and compelling, given the generous conditions. Other lines were put aside for another day. With the sheer quantity and quality of neve I was quietly hoping for a very direct line but was happy just to get on this most elusive of winter features.

Uisdean romped up the first pitch to the big plinth then it was decision time – follow the original winter line or move out right onto the front face as per the summer line. ‘Take a look’ was the consensus. I was totally enthralled climbing that pitch, not really believing you could find conditions that would make it possible, and yet we were there, soaking it up and smiling. This long pitch took us to below the upper Chandelle-like buttress where we joined the line taken during Guy Robertson, Pete Benson and Nick Bullock’s ascent of Minus One Direct.

Murdoch got a great pitch up this on thin ice, and then Uisdean had a slightly unconsolidated lead to the final crest and another dash up North-East Buttress and into the sun. So Minus One Buttress Superdirect (VII,6). There are so many variations on Minus One Buttress now for both summer and now winter I don’t fancy being the writer of the next guidebook. [Don’t worry Iain, that’s me!] Our take on the route will be a rare memory from an unsettled and sometimes frustrating winter. Murdoch even went as far to say that it was ‘quite good!’”