Dark Star on The Ben 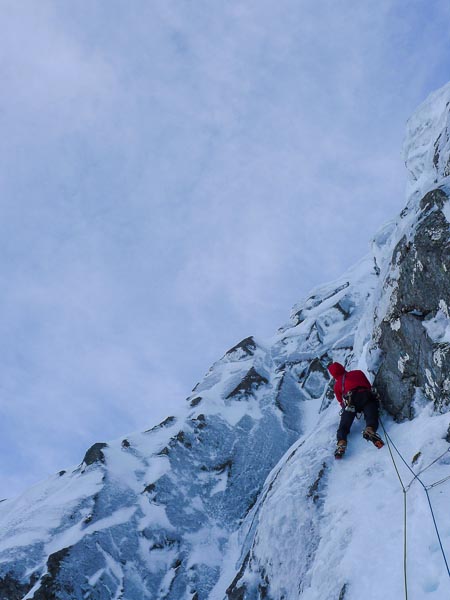 Uisdean Hawthorn on the first ascent of Dark Star on Ben Nevis. This five-pitch VI,5 takes the line of grooves on the left side of the Astronomy face overlooking Minus One Gully. It had been lusted over by Nevis winter aficionados for several decades waiting for the right conditions. (Photo Iain Small)

The thaw last weekend and high pressure and overnight frosts earlier this week, finally transformed the huge quantities of snow on Ben Nevis into ice and neve, to the delight of those fortunate enough to be in the vicinity mid-week.

“The Minus Face was in stunning condition, “Iain told me. “I had been watching the webcam and hoping that signs of actual rock emerging from the previous uniform whiteness meant neve. And it did, like I’ve never seen before! I managed to get hold of Uisdean (Hawthorn) and we arranged for a day on Tuesday, then Murdo (Jamieson) would join us on Wednesday if the conditions were OK . [They were – second post to follow!] No ambiguity about that, a welcome change after so many call offs and aborted days out. Time to cash in on the Ben in classic garb!

On Tuesday (March 11) we aimed for the Astronomy face and a line of corners and grooves bounding it’s left side and overlooking Minus One Gully. This gave us five fine pitches on perfect neve and ice, finishing up North-East Buttress in beautiful sunshine. Dark Star was VI,5 in those conditions, but on an average year it could prove quite thin in places.

There was an Alpine feel to the Minus Face with the many French teams based at the CIC Hut making the most of conditions. Left-Hand Route and Right-Hand Route were popular along with the Minus gullies, and one guided team followed the Smith-Holt Route into the basin and finished up Spaced Out. The guide then soloed Great Slab Rib and up Urban Spaceman – a pretty good day out!”