The Icefall of Doom 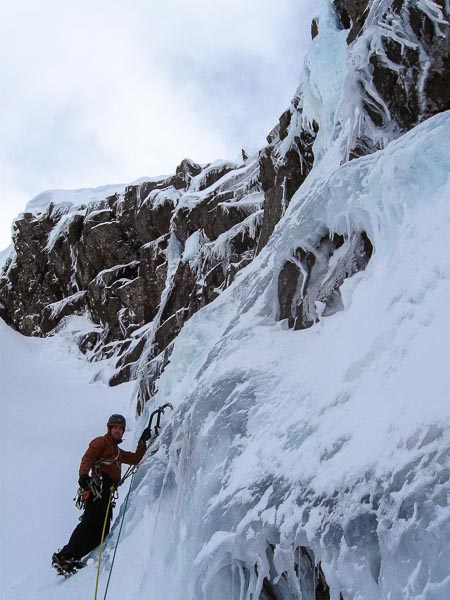 James Wheater on the first ascent of Icefall of Doom (V,5) on Creag an Dubh Loch. This steep two-pitch route lies on the right wall of North-West Gully on the far right-hand side of the cliff. (Photo Steve Addy)

On March 2, Steve Addy and James Wheater visited Creag an Dubh Loch and made the first ascent of the striking blue icefall halfway up the right side of North-West Gully. It lies up and left of the icefall of Blizzard Nightmare and the summer routes such as The Strumpet, and rather surprisingly for such a prominent feature, it had not been climbed before. Steve takes up the story:

“Last February I soloed up North-West Gully and spotted the icefall but it wasn’t quite complete. I didn’t think any more about it, but fast-forward to February 16 this year when James and I were skiing over the frozen Dubh Loch. We were struck by the monstrous cornices, the amount of snow build-up and the tantalising streaks of ice on the cliffs. Then James spotted the obvious icefall, and we both thought it looked good and guessed that it was probably unclimbed.

So on Sunday past (March 2), we trudged up to the Dubh Loch with vague plans of looking at this icefall, Bower Buttress or trying a route on the Central Slabs if the snow had consolidated. The cornices were still huge and the snow didn’t feel great, so we decided to have a look at the icefall. It was good to salvage the day with this route, which although short, was good fun! We called the route (with tongue in cheek) Icefall of Doom and graded it V,5.”

Also on March 2, Jason Currie and Neil Morrison took advantage of good, but slightly thawing ice conditions, to make the third winter ascent of Sword of Damocles on the nearby Broad Terrace Wall.