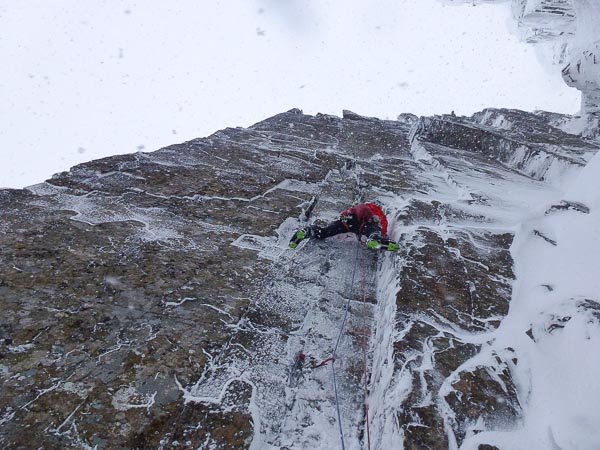 Olov Isaksson on the first ascent of Eggäschpili (IX,9) in Stob Coire nan Lochan. This demanding route taking a series of slim corners on the left wall of SC Gully is one of the most difficult Scottish winter first ascents ever climbed by an overseas team. (Photo Karin Zgraggen)

Olov Isaksson from Sweden and Karin Zgraggen from Switzerland pulled off a significant accomplishment on February 28 when they made the first ascent of Eggäschpili (IX,9) on Stob Coire nan Lochan in Glen Coe.

“I had such an amazing time on the BMC Winter Meet that I decided to return,” Olov told me. “We (Karin Zgraggen and I) started off by climbing Magic Crack on Thursday (February 27). It was very iced up but still brilliant. This was Karin’s first Scottish climb and she definitely shared my enthusiasm!

When Ian Parnell Will Sim and I were climbing Slenderhead in Stob Coire nan Lochan during the Winter Meet, we were ogling a steep corner on the opposite side of the gully. It looked like a great line and I really wanted to get a closer look. So, on Friday (Febrauary 28) Karin and I went back up and we managed to climb it (after putting up a big fight).

The first pitch (20m, crux) starts in a left-facing corner. Technical and sustained climbing (not great protection) led to a system of cracks. We climbed these to a ledge and moved right into another left-facing corner (belay). The second pitch (15m) climbs the corner, which is still sustained, but has better protection. We belayed on a small slanting ledge. The third pitch climbs five more metres of steep terrain followed by 10m of easier climbing. (The pitch looked straightforward so I changed to a warmer pair of gloves, which was a big mistake as I got incredibly pumped and was very close to falling off). The third pitch ends on a big slanting ledge. After this one can follow easy ground to the top, but we choose to abseil off from here, as Karin was getting hypothermic and refrained from climbing the third pitch.

Since this was my sixth Scottish climb, I don’t really think that I’m qualified to give it a grade. All I can say is that it felt a lot harder than the other Grade VIIIs that I’ve climbed (Slenderhead, Crazy Eyes and Godfather). So maybe its Grade IX, but I’d prefer to wait for someone more experienced to give it a repeat. For a route name we agreed on Eggäschpili – this means something like ‘corner games’ in Karin’s local Swiss dialect (Canton of Uri).

On Saturday morning my arms were still cramping as I picked up my backpack and started the hike up to the Ben. Will had suggested that we try Centurion, but it felt like a better idea to use the legs rather than the arms. So after chatting with some locals at the CIC Hut we headed up Tower Ridge and had another great day out!”