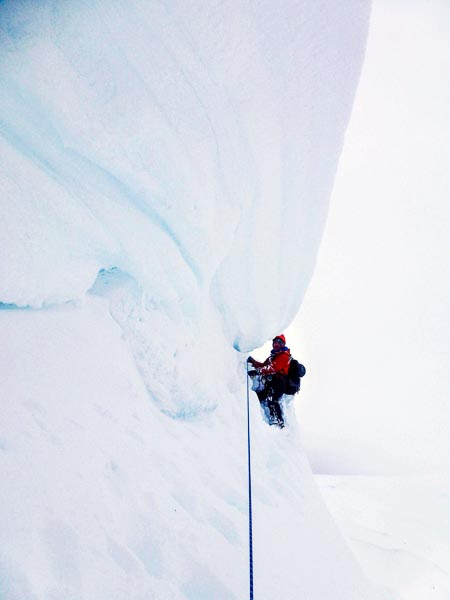 “John Mackenzie used to talk with awe about the cornices above Coire na Feola of Ben Wyvis,” Andy Nisbet writes. “Also the great central icefall, which one day would form, and he hoped he would be there. But John Lyall saw it and climbed it in 2012. In prime conditions, this is one of Scotland’s great icy cliffs. So most of the attention had been on the ice lines and the buttress left of the central icefall was unclimbed.

In February 2013 I was driving south from Ben Hope. It was very warm, 15 degrees in Inverness, but the ice had been great on Ben Hope so I just wondered if it had survived the thaw and that buttress might be iced. Wet ice is great to climb and cornices that year were small. When I got down to the corrie, the line was bare but Gael Force Grooves was fat ice top to bottom. It looked very steep for Grade IV but I had walked a long way and it was too tempting. So I scared myself and climbed what seemed on the day, one of the best Grade V’s I’d ever climbed (it gets one star).

But the buttress was still waiting and I finally decided the walking conditions were good enough. Jonathan Preston didn’t need much persuasion and we headed in on Friday (February 28). The forecast was clear and cold so it was a bit disappointing when the mist began to form as we approached the top of An Cabar. The plateau was totally white but the mist thin and it was easy to follow the crest line. I had a picture of the map in my head so just legged it, waiting for a descent, after which we would traverse to the north and descend into the corrie. It did seem a long way, and then a cornice appeared on the right, so I knew we’d gone too far (this descent was totally in my imagination). But where actually were we?

We backtracked a bit and then started to descend; by this time we hadn’t seen anything other than white for an hour. As it steepened we put crampons on. Jonathan was quicker and went ahead. Suddenly the ground ahead cracked open and slid off into space. I’ve never seen Jonathan run so fast back uphill. Despite us walking on neve, the vibration of his footsteps (he is a big lad) had set off a small slab avalanche that had given us warning of an imminent cornice edge. We jibbered for a bit but quickly decided to come back the following day (March 1) when it was supposed to be clear.

Sandy Allan joined us and sure enough it was clear, but only just. This time we each had a map, and I had even printed out a very large-scale version of the plateau. The light was good enough for us to see where we were going, but not good enough to see if the convex slope suddenly dropped off. Also it had snowed overnight and the slope ahead was the worst aspect. So between Jonathan and I still being nervous about cornices, and Sandy being nervous about avalanches (working for SAIS does seem to do that to you), we dithered a lot before finding our way down the slope into a corrie filled with avalanche debris.

It wasn’t freezing down in the corrie bottom so the walking suddenly became hard work and there were serious doubts about the turf being frozen. Which turned out to be true for the small bits, so the planned line didn’t work. Well, I was trying to pluck up courage when Jonathan walked in above me and pointed out that his way was easier. So we all walked in, and then I was trying to pluck up courage for the next bit when Sandy suggested that a ledge on the right might just lead somewhere useful. So I went that way and he was right, and the turf even began to improve.

Jonathan led the next pitch on steeper but properly frozen turf, and then we alternated up towards the top. A huge cornice appeared at times out of the mist but we tried to ignore it and assume we’d find a solution; a part of which was me doing a ten metre pitch and sending Jonathan up. The cornice was huge but at its right end was a snow pinnacle and he just wondered if you could bridge up and reach over. Appearances are deceptive, especially to cornice pessimists like me, and a couple of things happened when he reached it. First of all the pinnacle fell off when he hit it, but more encouragingly it wasn’t as big at the right end as my imagination had thought. So he dug his way through in a few minutes and there was great relief, at least from my end.

We agreed easily on technical 4 but the overall grade wasn’t easy. It was quite a scary route so perhaps V,4 was fair, although cover the route with neve and it would have been a doddle. Driving home, Sandy’s car came up with a warning on the dashboard, “Risk of Ice”. That will be the first we’ve seen today then, was the general thought, but it seemed an appropriate route name!”

1 Response to Risk of Ice