Posted on February 28, 2014 by Simon Richardson 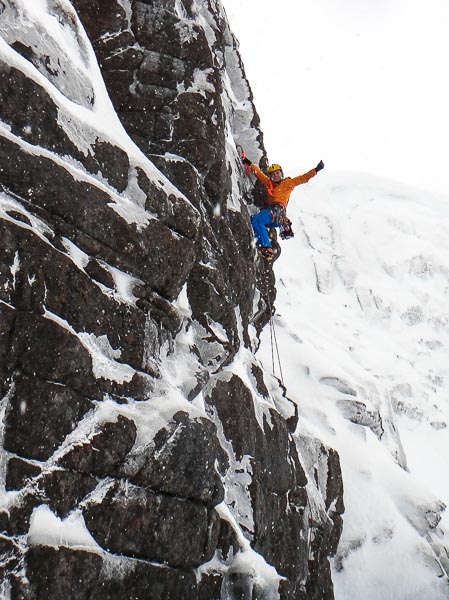 Will Sim climbing the crux pitch of Open Heart (VIII,9) in Coire an Lochain during the third ascent. The very heavy snow conditions this season mean that few teams have ventured onto the higher buttresses of the Northern Corries in recent weeks, and only the very steepest routes have escaped the huge amounts of snow. Massive cornices overhanging significant portions of the cliff are another major hazard. (Photo Mark Chadwick)

Will Sim and Adam Booth visited Coire an Lochain in the Northern Corries on February 24, and made the probable third ascent of Open Heart (VIII,9). This very steep test-piece, which takes a direct line up to the crux of Ventriloquist, was first climbed by Ian Parnell and Guy Robertson in April 2006. It saw a second ascent by Dave Almond and Simon Frost in December 2011.

“It’s a cool route and a good line,” Will told me.” It felt a bit necky in its current icy state, but it was still just about protectable. It was interesting to head in to Lochain for the first time since early December, as its been “out of bounds” most of the season due to being totally buried. The amount of snow at the bottom is insane, and the peg that protects the tricky traverse on the first pitch of Ventricle (normally eight metres up) is now at ankle height when you gear up, and a glacier is in full flow over the Great Slab!”

Simon Richardson is a passionate Scottish winter climber
View all posts by Simon Richardson →
This entry was posted in Repeats and tagged Adam Booth, Northern Corries, Will Sim. Bookmark the permalink.