What’s in a Name?

Posted on February 27, 2014 by Simon Richardson 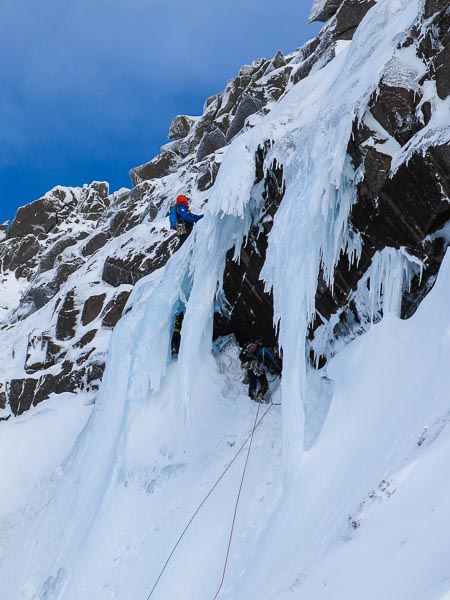 A leader on the crux section of K9 (IV,4) on Lurcher’s Crag on Sunday February 16 – one of four teams to climb the route that day. Or is this route Window Gully? (Photo Simon Richardson)

Roger Everett and I were rather confused when were climbing on Lurcher’s Crag on February 16. It was our first visit to the cliff, and the folks climbing the attractive icefall to our left had told us that they were climbing K9, yet the team we met on the top said they had just done Window Gully. We both suspected a case of mistaken identity, because the icefall crux, which involves cutting a window from behind the icefall and stepping on to the front face, reminded us of a famous John Cleare photo of Bill March making the first ascent of Window Gully in March 1972. It’s interesting that we both remember that photo, but we’re both of an age that when we started climbing front pointing was just being developed, and Bill March was one of the stars of the show.

As if by chance, a couple of days later I received an email from John Lyall that Andy Nisbet forwarded onto me, which helped to explain our confusion:

“I’ve been puzzled by the description of Window Gully and its position on the crag for a long time,” John wrote. “So when I was on the crag last week I took my camera to sort things out. I was climbing K9, and my photo shows the lower icefall going through the big roof, the rock features behind and the snowdrift all fitting with the first ascent photo of Window Gully.

I think the confusion goes back to the Bill March 1973 guidebook, where only North Gully is described, but South Gully is mentioned. When Window Gully is described in the next guide (1985), it is described as being between North and South Gullies, but it should have said North and Central Gullies, as Central had now been climbed. The Window Gully icefall presently in the guide is not far enough up the crag, nor is there a position to get a photo like this.

In 2010, the outside of this icefall was climbed by a few teams up the steepest right hand section, at V,6. Stuart Carter was one of the folk, but he had followed tracks.

The Bill March guide also mentions summer ascents of what are now Drystane Ridge and Collies Ridge, both at Moderate in the current guidebook. He also names Southern Ridge, which is now called Deerhound Ridge, and grades it Mod. He also describes a route up the buttress to the left of North Gully, giving a grade of Mod and listing the first ascensionists. I feel a bit like Robin Campbell delving into the archives!”

Allen Fyffe, who made the first ascent of K9 with his son Blair in March 1996, agrees with John’s assessment that the icefall is the same, but it’s not quite as simple as that because Allen and Blair linked in an impressive upper icefall during their ascent. This second icefall is up and left of the main line, so is not always climbed as a follow-on from the lower ‘window’ icefall, and for sure, it was not climbed by Bill March in 1972.

So if this unravels the history behind K9, what about the route now known as Window Gully which lies a hundred metres further right? Andy Nisbet made an ascent in February 1984 – are there any earlier takers?

2 Responses to What’s in a Name?