Posted on February 24, 2014 by Simon Richardson 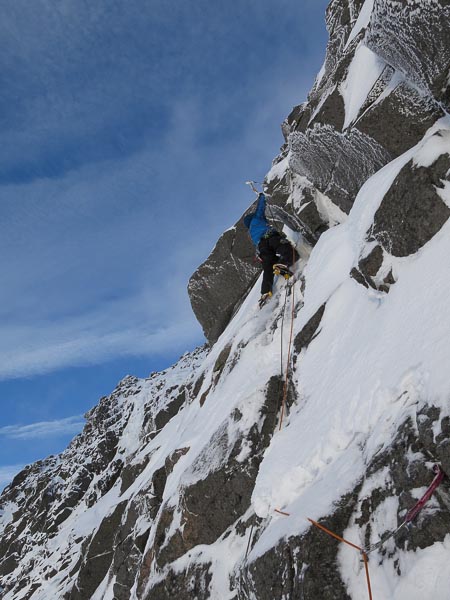 Roger Everett on the crux pitch of Impulse Grooves, a new VI,7 on the Arctic Monkey buttress on Lurcher’s Crag on Cairn Gorm. Snow conditions were so heavy that it was impossible to distinguish between blank slabs and turfy ground, making route finding both exciting and challenging. (Photo Simon Richardson)

Roger Everett and I were wrong-footed by logistics, weather forecasts, blocked roads and avalanche-prone slopes throughout the previous weekend. We ended up visiting Lurcher’s Crag on Sunday February 16, which I think was our Plan D!

The weather was good, but neither of us had been to the cliff before, and our guidebook only listed a handful of routes. The crag had a nice friendly feel with lots of people about, the scenery was magnificent and with our plans in disarray we didn’t really care what we did, as long as we climbed something. Roger fancied The Shepherd, but there were two teams ahead of us, so we went to look at K9. When we got there, we found we were fourth in line, so we thought we’d carry our ice screws up a mixed line on the (Arctic Monkey) buttress to the right. We ended up following a logical sequence of grooves straight up the front face to arrive on the apex of the lower buttress before finishing up the left flank of the easy ridge above. We had no intention of climbing a new route and fully expected it had all been climbed before.

When I arrived home, I saw a Facebook post from Andy Nisbet saying that he had climbed the face right of K9 with Susan Jensen two days before, and a look at the SMC Journal revealed three more of Andy’s routes on the buttress. I’ve been (inadvertently) following Andy’s footsteps quite a lot this winter, so I put this down to another dose of fate, but I emailed Andy anyway, to find out the relationship of our climb to his recent route, and the other climbs on the buttress.

About twenty emails and six topos later, we all finally unravelled the relationship between the routes on the buttress. Remarkably they are all independent, although a couple do cross each other. Starting from the left, Andy and Susan’s line from February 14 is called Tetradecaphobia (V,5). It takes the right end of the roof system down which the icicles of K9 form, before climbing the grooves and corners to gain the crest of the upper buttress.

The route climbed by Roger and I two days later starts about 30m to the right of Tetradecaphobia, and climbs four pitches up corners and grooves to the top of the lower buttress before continuing easier mixed ground to the left of the crest to the top. Roger made a fine lead of the crux third pitch, a bold and technical overlap leading on to smooth slabs, and given the spur of the moment route choice, he suggested we call our climb Impulse Grooves (VI,7). The remaining three routes all start a long way away at the right end of the buttress, although Overdraft takes a natural rising left traverse line, crossing Impulse Grooves on its second pitch, before climbing near Tetradecaphobia and finishing up a set of grooves to the right.