Posted on February 25, 2014 by Simon Richardson 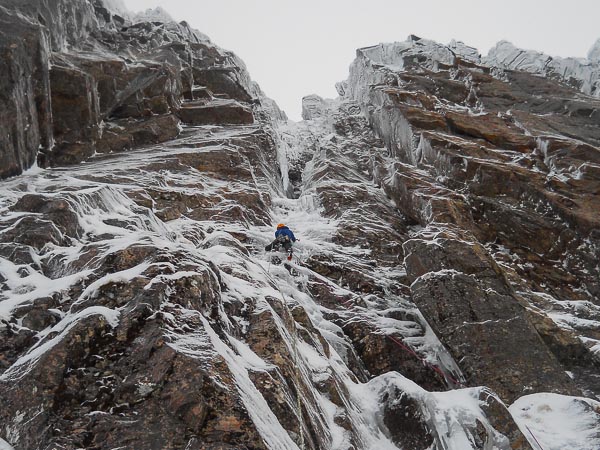 Iain Small leading the opening pitch of Vishnu (VII,7) on Beinn Eighe’s Far East Wall during the second ascent. This prominent line, first climbed by Andy Nisbet and Andy Cunningham in February 1988, has waited over 25 years for a repeat. (Photo Murdoch Jamieson)

There are two absolutely classic-looking traditional winter lines on the stupendous Far East Wall on Beinn Eighe – Kami-kaze and Vishnu. Both routes were climbed by Andy Nisbet in the 1980s during the initial winter exploration of the crag. The steep and well-protected Kami-kaze (VI,7) is now approaching modern classic status, and has already seen several ascents this season.

Vishnu is a different story however, and although it is 26 years since its first ascent, it had not seen a repeat. It requires icy conditions, and was discussed as a possibility during the BMC International Meet in January, but nobody took up the challenge until February 16 when an enterprising three-man team made a spirited attempt that was foiled by deteriorating conditions after the leader had climbed the crucial ice pitch in the middle of the route.

The long-awaited second ascent fell three days later to the crack team of Murdoch Jamieson and Iain Small on February 19. Murdoch, fresh from his success on The Root of All Evil, takes up the story:

“On Wednesday Iain and I returned to the crag. Our first option was not a goer so we settled on doing Vishnu. I felt slightly intimidated with the grade and knowing that a team had bailed on Sunday. Iain linked the first two pitches, and I then set off up pitch three, where with a bit of digging, I uncovered some good wires. Iain did the top pitch, which certainly felt a bit more like real climbing, and was tricky. He managed to get wires on the right before stepping left onto the ice. Overall VII,7? I don’t know – that first pitch is pretty serious but not technically that hard.”

Iain swithered about the grade too, but eventually both Murdoch and Iain settled on a grade of VII,7. (The route has been graded VII,6 up to now, but was first climbed before the two-tier grading system was in place). The fact that two such talented climbers were unsure of the grade speaks volumes – it would be safe to assume that Vishnu is at the upper end of the Grade VII category!