The Route of All Evil

Posted on February 23, 2014 by Simon Richardson 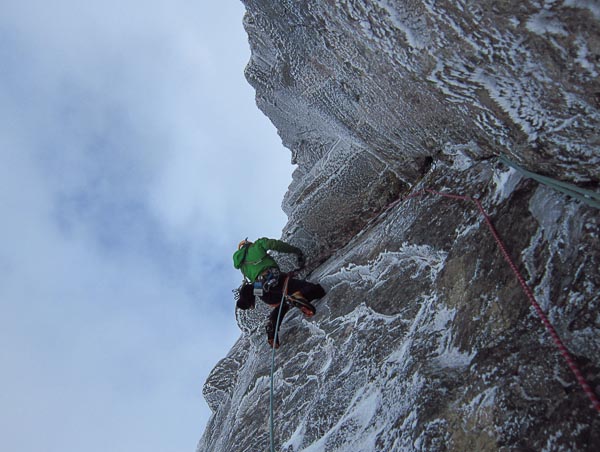 Murdoch Jamieson and John Orr pulled off a magnificent climb on February 16 when they made the first winter ascent of The Root of All Evil (IX,8) on Beinn Eighe’s Far East Wall. This summer E2 was first climbed by Andy Nisbet and J.Allott in June 1996.

We planned to have a mellow day on something like Kami-kazi or Rampart Wall,” Murdoch told me. “However on first sight of Far East Wall, John asked what the obvious big left-facing corner was. I told him it was The Root of All Evil, and no, it hadn’t seen a winter ascent. We took a walk along to look at Vishnu as that was another option, but after looking at that, John said he was keener to experience some steep Beinn Eighe mixed. The deal was he would do the initial pitch and I would do the 5b and 5c pitches.

John did a good job in despatching the first pitch, which was much trickier than it looked. I set off up the 5b pitch. From the word go, it was a pretty sustained and pumpy affair. The only rest was on a small ledge before the traverse left into the main corner. The guidebook talked about belaying three metres below the roof, so I was expecting a half decent ledge. There was none, just a slight slopey foothold and a few small edges – a full-on hanging belay!

John seconded the pitch and felt a bit overwhelmed by the steepness of the whole thing. He set up a belay just below me and I set off for the 5c roof. This looked mental and harder than I thought, but I was keen to have a look. There were only a few tiny edges for the feet but enough. The whole thing was really strenuous. Then moving back right proved much trickier than I thought, as there were just a few tiny hooks for the tools. Pulling round the arete to join Hydroponicum was pretty hard, and the belay was not the most inspiring either. There were two old pegs linked by some tired slings. So I managed to get another peg half in, a Pecker and a small stopper – great!

Once again, John did a brilliant job seconding as he had been strapped to the hanging belay for a wee while. Having not really read the guide properly, I thought we just had the top pitch of Hydroponicum to do. I remember Andy Inglis saying it was VII 7, so I thought John could quickly nip up it. But on closer inspection at the guide what loomed above was the crux of Hydroponicum. Time was marching on, a few words were said, but I couldn’t not have a look. Anyway, this went fine, as it felt easier than the previous two pitches. I linked the top pitch to get to the top just before darkness fell. John joined me a short while later and we were both buzzing with how cool the whole thing was.”

Murdoch was undecided about the grade, and initially settled on VIII,8, but a day later he wrote to me again.

“There has been a mad exchange in emails and chat about the grade. I’m beginning to think IX,8. It’s just that it’s pretty sustained. It has good kit, but the belay is not ideal at the end of pitch three. I think there is a lot of tech 8 all on top of each other. I’ve only done the occasional tech 9 move so it’s hard to compare. I don’t think there is a stopper move of 9 in it… but it needs a second ascent to confirm.”

One Response to The Route of All Evil