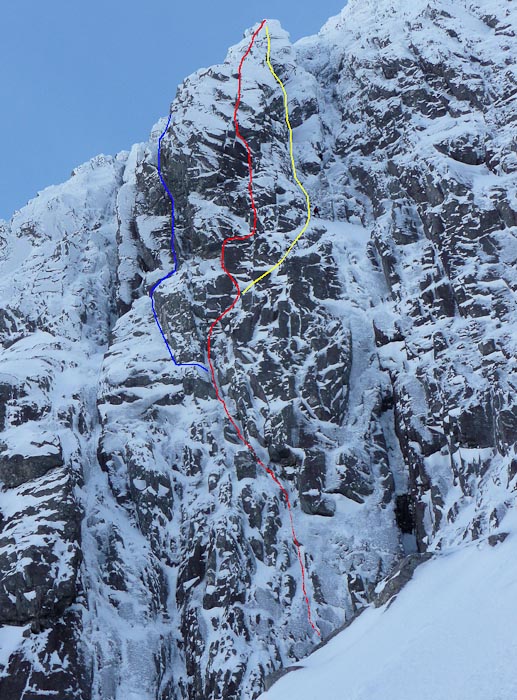 The line of Minus One Direct (VIII,8) on Ben Nevis is marked in red. Lower section of route not shown. (Photo Iain Small)

On Wednesday March 10, Guy Robertson, Pete Benson and Nick Bullock made a stunning winter addition to the Minus Face by following a line approximating to the four star summer E1 classic Minus One Direct. The trio followed the footsteps left by Iain Small and I three days before (when we climbed Integration) for two pitches and then broke up and right to gain a continuous crack-line leading up the buttress. “The route was never particularly hard,” Guy told me, “but this is possibly the finest winter climb I’ve ever done. The climbing and the line were simply superb!”

The route was just reward for Robertson and Benson who had tried the line several years ago but were forced to retreat due to a sudden thaw. The topo shows the line of Minus One Direct (VIII,8). Integration (blue) moves left from the top of the lower snowy grooves (half-height in the picture) into the left-facing corner of Subtraction. The original Paul-Muir line up Minus One Buttress (yellow) continues diagonally right in to the Meadow of Minus One Gully and then finishes up the right-facing corner on the right flank (above the figure belaying in Minus One Gully).

Bullock and Benson, who are currently living in Chamonix,  flew across  to Scotland when they heard about the brilliant winter conditions. This one route was well worth the trip, but based on a tip-off from Robertson, they also made the third ascent of West Central Gully (VII,8) on Beinn Eighe a few days later.