From The Jaws of Defeat 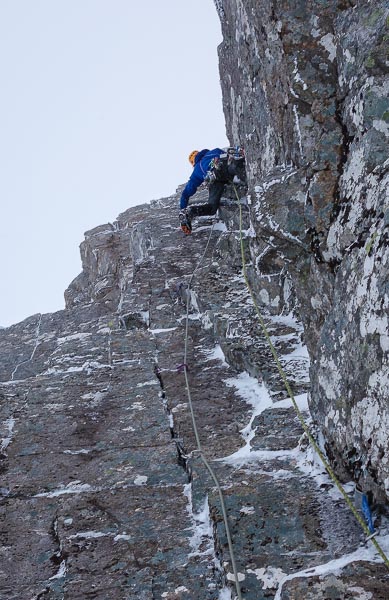 Iain Small moving through a bulge on From The Jaws of Defeat, a new VIII,8 on Ben Nevis. This sustained and spectacular 50m-long groove was the climax to the five-pitch route on the North Wall of Carn Dearg. (Photo Simon Richardson)

The vertical triangular headwall on the left side of the North Wall of Carn Dearg on Ben Nevis is split by a spectacular groove that runs up to the very apex of the wall. It had fascinated me for years, so when Iain Small suggested we try and climb it last Sunday (March 23), I jumped at the chance.

Unfortunately, conditions were not too helpful as a deep thaw had stripped the cliffs the previous week, and before it had a chance to re-freeze, a heavy snowfall had smothered the crags on Friday and Saturday. We hummed and hawed about trying something in Coire na Ciste instead, but in the end we settled for Plan A and headed up to the base of Carn Dearg.

Iain and I had climbed the deep chimney on the left side of the triangular headwall when we made the first ascent of The Cone Gatherers in 2008. On that occasion we raced against darkness as we climbed into the gloom of the December twilight, which sums up the challenge of climbing on this wall because it is such a difficult place to get to.

This time, with longer March days we felt we had time on our side, but our initial choice of line ground to halt in deep snow overlying unfrozen turf. With our time advantage quickly slipping away, it would have been easy to turn tail, but instead we knew that we had to find an alternative that relied solely on snowed up rock. I remembered that the rock was clean and steep on the wall left of Staircase Climb Direct that I had climbed with Chris Cartwright way back in 1999, so we retraced our steps and headed up towards that.

The tactic worked. Iain led a spectacular tech 8 pitch left of an overhanging prow, and then we ploughed up easier ground for a couple of pitches to gain the foot of the triangular headwall. The snow was deep with a layer of windslab, and at one point I was considering the wisdom of continuing (especially when we heard the boom of one of the Castle gullies avalanching), but there was the odd running belay, which encouraged upward progress.

The first pitch on the headwall was steep and devious, but eventually it led to the base of a spectacular 50m-long groove that soared vertically upwards into the late afternoon sky. This was a perfect Iain Small pitch, with reasonably straightforward tech 7 climbing to start, but as it steepened the protection became sparser, and two crux sections led to a devious slabby finish. At the top, Iain likened it to a mini version of The Great Corner, but there was no time for pleasantries as the light was fading fast.

Two long snow pitches took us onto the upper crest of Ledge Route, where a welcome set of footsteps wound down into the lower reaches of Number Five Gully and the warmth and welcome of the CIC Hut. It had been a fine adventure snatched from the very jaws of defeat.