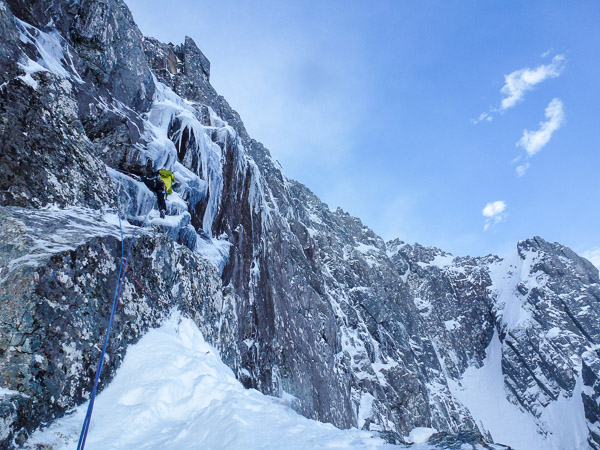 Nick Bullock climbing pitch 5 of The Shield Direct (VII,7) on Ben Nevis on 24 March. Instead of going left above the chimney-flake as per the guidebook description, Bullock and Guy Robertson continued straight up an icicle-draped overhanging wall, which proved to be the crux of the route. If anyone else has gone this way, then please get in touch, as it will be recorded as an alternative finish in the next edition of the SMC guidebook. (Photo Guy Robertson)

“And again, like all of the times before in this winter of difficult conditions and wrong weather forecasts, Guy Robertson, normally so knowledgeable in where to go, procrastinated,” Nick Bullock writes. “An Teallach, Beinn Eighe, Glen Coe. I received text messages throughout the day, each one telling me what crag and what time to meet. Finally, at 7pm, Cairn Dearg, the venue I had suggested at the start of the text tennis, was decided upon.

The heavy snow storm on Saturday, followed by rain, more snow, rain, snow and almost the first frost of winter on Sunday night, made for possibility anywhere on Cairn Dearg but neither Guy nor myself had been on The Ben for a while and I felt the weight to produce something good for Guy as he had once again been building pressure like my coffee pot.

‘Something will be in Guy; it has to be given that snow and a frost.’

6.30am – And as we walked the frozen gravel, avoiding the snake tongues of clear blue ice welded to the surface of the footpath, I could sense the weight lifting from both our shoulders.

The CIC Hut was near and like the frost scraped from my windscreen earlier, the alpenglow warmed the white summits for the first time of my 2014, and in this one fell swoop, it made up for much of the battling. We were still heading for Cairn Dearg, but with open minds and a monster rack of gear, hopefully we had all bases covered. The only two things we did not bring were ice screws and a guidebook.

9.00am – Gently, I flicked an axe. The pick curved in the cold air and penetrated a thin skin of ice. Gentle, the second axe-pick connected but with downward dragging force, the pick sliced, puckered and wrinkled the frozen water until it caught and held on some hidden obstruction. I breathed deep and stepped from the snow. Above me, the steep corner of The Shield Direct with a continuous stream of thin ice beckoned. And above this, the two hundred and eighty five metres – flakes, chimneys, rock-overhangs, snow-fields, overhanging-ice, history, reputation, connection, surprise – Fowler and Saunder’s thirty-five year-old climb.

Once again an axe arced gentle and the pick penetrated thin with a stabbing flesh squish. Spindrift lifted from the summit slopes poured down the line clotting my eyelashes. I shouted to Guy,

‘Do you know where we are going?’

His answer was succinct, ‘Up.’”

2 Responses to The Shield Direct Direct